Could algae save the planet? That's right, algae. The green stuff that clogs up your pond and rots in giant smelly heaps on the beach. This extremely diverse group of simple, autotrophic organisms is the focus of efforts to develop a green energy source to replace oil.

Both microalgae (unicellular) and macroalgae, such as seaweed, are being used in a range of products known as 'advanced biofuels' thanks to their rich energy content and minimal land use. It is hoped they could eventually break our dependence on oil and reduce global carbon emissions.

As part of the Society of Biology's Policy Lates debate series, experts from the world of biofuels gathered in London to discuss the future of this remarkable group of organisms in energy production. Is fuel derived from algae a viable alternative to oil, or just a green dream?

Algae are like any other photoautotrophic organism: they turn simple inorganic compounds such as CO2 and water into complex, energy rich hydrocarbons using light as an energy source. The technology and infrastructure to create fuel from this sort of biomass have existed for at least 60 years.

Dry plant matter (lignocellulose) is the most abundant raw material in the world for the production of ethanol by fermentation, and many biofuels are made using the oils from crops such as corn or soya beans. Yet the displacement effect of using land crops for fuel production instead of food arguably causes more carbon emissions via deforestation and can drive up food prices.

Oliver Chadwick, from the Department for Transport, says some models suggest that in terms of emissions it can actually be worse than using crude oil. "To provide biofuel for one lane of cars requires a strip of land the length of that lane, and 8km wide," he says. "Conventional biomass is just not efficient in terms of land use."

This is where algae come in. Some species of microalgae can convert up to 60% of their biomass to oils (compared to 2-3% in soy beans). Because they do not produce complex differentiated tissues such as stems and leaves, algae grow faster than crops. Plus, marine macroalgae do not even have to be grown on land.

"You can do much better than terrestrial plants using algae," says Professor Rod Scott from the University of Bath. His research aims to develop strains of microalgae especially for biofuel production. "To provide 50% of the USA's fuel requirements with corn oil, you'd need 846% of the available crop area in the US, which is clearly impossible. That falls to just 2.5% with microalgae."

Mixing algal biomass with a solvent and catalyst produces a diesel-like substance called biodiesel, plus glycerol. Techniques are emerging which mean products are not limited to biodiesel. Pyrolysis involves heating algae to very high temperatures (500-700°C) in the absence of oxygen to produce a bio-char (charcoal) and a wider range of fuel products. Hydrothermal liquefaction puts whole, unprocessed algal material under pressure, using slightly lower high temperatures (250-350°C), with water to produce 'biocrude' and hydrogen gas.

These processes essentially mimic the natural production of oil. Crude oil itself is formed from ancient algae, as well as other marine plankton. Algaenan, a tough hydrocarbon polymer found in algal cell walls, is turned to oil when layers of plankton are buried under the seabed and subjected to extreme heat and pressure.

Unfortunately, producing oil this way takes about 30 million years. Replicating the process in real time, at a scale vast enough to supply global demand, is the challenge.

How does it work?

Algae can be turned into fuel via:
Anaerobic digestion by bacteria, producing methane.

Transesterification, where algal lipids are reacted with alcohols to produce biodiesel and glycerol.

Pyrolysis and hydrothermal liquefaction, which use heat and pressure to reduce algal lipids to a range of fuel products. The advantage of the latter is that whole algae or 'wet biomass' can be used.

All in a day

Professor Scott says processes such as pyrolysis can produce an oil equivalent from algae in about a day. But it is important to see "just how much oil we use" before getting excited about algal fuels, he says. "At the moment we use 90 million barrels of oil, over 14 billion litres – every single day. You can fiddle around with a flask of new fuel and think we're doing quite a good job, but we use a staggering amount of oil."

There are great costs involved in growing and processing algae compared to just piping stuff out of the ground. Algal cells produce more hydrocarbons when they are starved of nitrogen, so it is a two-step process, where the cells that are to be starved must be separated from the ones still growing. Also, the more microalgae you try to grow in one space, the less light gets through to each cell, meaning growth rate falls.

Dr Andrew Spicer is chief research scientist of Algenuity, a UK company that provides products and services to the emerging algal biotech industry. He says microalgal biofuel production will need to be scalable up to "millions of tonnes per year" if it is to replace liquid fuels in any meaningful way.

Influential reports on biofuels[1-2] say it is biology, not industry, that will help drive this through strain selection and optimisation. Yet Dr Spicer says significant challenges remain in translating bioengineering to the industrial agricultural scale necessary for industry.

"To assume you can genetically modify an algal cell to produce more biofuel and then expect to grow it en masse is perhaps naïve," says Dr Spicer. "It doesn't adequately take into account the regulatory requirements and risk analyses that would need to be satisfied prior to any significant trials."

In the face of such challenges, Dr Spicer describes how many companies who initially branded themselves as algal biofuel companies have shifted toward the production of "higher value, lower volume algal products as opposed to fuels". 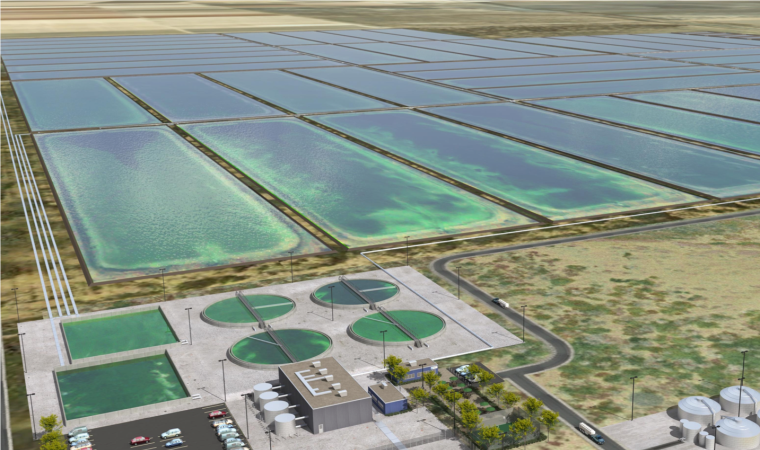 Algal farming for biofuels in the future. © Sapphire Energy

Macroalgae, such as seaweed, already grows in vast quantities and can be farmed from the sea, or recovered from the beach, so may seem like a more promising biofuel feedstock. They can also provide valuable environmental services. For example, seaweed can remove excess nitrogen from salmon farms, while some species of algae can contribute to waste water treatment, bioplastics, food, and protein production.

Yet before anything can be called a biofuel it must show its green credentials, says Dr Michele Stanley, director of the NERC Algal Bioenergy Special Interest Group. "Seaweed beds on the ocean floor have an important role in preventing coastal erosion, and removing beached kelp interferes with coastal ecosystems," she says, "so you can't just come along and take it all away."

China is well ahead when it comes to growing seaweed in shallow waters, producing an estimated 10 million tonnes a year. Elsewhere, production is still low, says Dr Stanley.

"It all falls to pieces when it comes to economics," she says. "Costs can vary from €50 per tonne for nearshore, floating kelp, to €400 for offshore kelp, to €2,500-plus for experimental systems."

Stacking up? Oil vs Algae in numbers

Part of the mix

Ultimately, algae are likely to be a valuable part of a range of products gradually replacing oil, says Dr Stanley, not a miracle alternative.

"I'm of the view that one fuel won't solve the energy crisis. People are fixated by the idea that there is one fuel out there – and there won't be. Microalgae will not fuel the UK because of the land mass required, but it could provide a valuable contribution and other services like removing excess nutrients from waste water."

It is up to governments around the world to keep supporting research and put the infrastructure in place to support the production and use of algae as fuel. The UK Government will soon be calling for evidence on advanced biofuels to inform its energy strategy, including the emerging algae technologies mentioned in this article.

The EU is also considering changing European renewable energy targets to take into account land use consequences, which could lead to additional support or subtargets for algal biofuels in transport.

But, for the time being, algal biotechnologists will continue to burn the midnight oil in the hope of making a viable biofuel for the future.

Thanks to all the panellists who contributed to the Policy Lates debate in December. For more information on the series contact jackiecaine@societyofbiology.org

Oliver Chadwick is the head of biofuels regulation at the Low Carbon Fuels department of the Department for Transport.

Duncan Eggar is the BBSRC's Bioenergy Champion.
Rod Scott is a professor of plant molecular biology at the University of Bath.

Dr Andrew Spicer is the chief research scientist of Algenuity.

Tom Ireland MSB is managing editor at the Society of Biology and a freelance journalist.