The Wonder of Whiskers

Almost all mammals except apes have whiskers, yet as a sensing organ they are relatively understudied. Comparative biologist Robyn A Grant explains how different species use their whiskers and what she hopes to learn about these brilliant bristles

As humans we are acutely aware of our sense of touch. Our fingertips are packed with sensitive touch sensors, or mechanoreceptors, which can detect tiny vibrations and texture. From these sensations we can precisely judge if objects are rough or smooth, big or small, soft or hard. Many other mammals do not have sensitive fingertips like humans, but instead have a sense of whisker touch. Their whiskers are just as sensitive, sometimes even more sensitive, than our fingertips.

Animals use their whiskers to guide many important and complex behaviours. Whiskers are used for guiding foraging and hunting in the dark. For example, just one touch from the whiskers of an Etruscan shrew on a cricket can identify the spikes on the prey’s leg to help target an attack – the shrew plucks off the cricket’s jumping legs to disable it before feeding.

Dormice will scan an area with their whiskers to ensure safe foot positioning on small, precarious branches, and stretch and touch the branches across a gap to ensure it is crossable before jumping. Whiskers even guide social interactions – male rats, for example, use their whiskers to judge the position of their opponent during boxing matches.

Mammalian whiskers are one of the most specialised sensory systems. All mammals, apart from humans, great apes and rhinos, have whiskers at some point in their lives. Even dolphins are born with whiskers, but these fall out within the first week of life leaving electro-sensing follicles. River dolphins keep their whiskers throughout their lifetime to sense prey and water movements in murky river water.

Indeed, animals with the longest and most numerous whiskers tend to live and forage in dark, complex environments. These ‘whisker specialists’ tend to live either underwater or are nocturnal and arboreal. 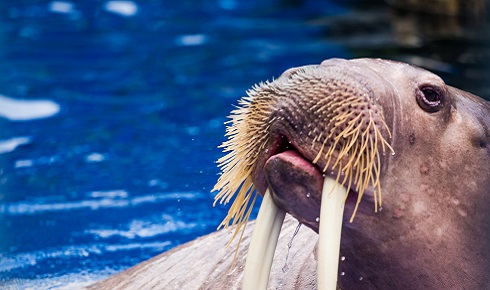 Pinnipeds have some of the longest and most diverse whiskers

Perhaps the longest and most diverse whiskers can be observed in the pinnipeds – the seals, sea lions and walruses. While most seals and sea lions have around 35 whiskers on each cheek, walruses have around 150. They use their whiskers like a rigid brush to dust through the bottom of the seabed searching for food.

Seals have specially adapted undulating whiskers that make them especially suited to hydrodynamic sensing. Like dimples on a golf ball that keep the ball stable in the air, undulations on a seal whisker keep the whiskers stable in the water, which makes them even more sensitive to tiny water movements.

While whiskers in marine mammals are diverse in terms of number, position and shape, in terrestrial mammals they are actually quite well conserved. They tend to be smooth, tapered and circular in cross-section. In many mammals they are also arranged in an orderly fashion – in a grid with rows and columns.

Neuroscientists can follow the sensory signal of each whisker from the follicle, through the brainstem, thalamus and cortex in the brain, helping us to understand how the brain codes sensory information. For example, the pattern or order of touch over the whisker pad will cause a pattern of innervation in the brain that will correspond to touching a certain texture or shape, and aid with object localisation and identification. 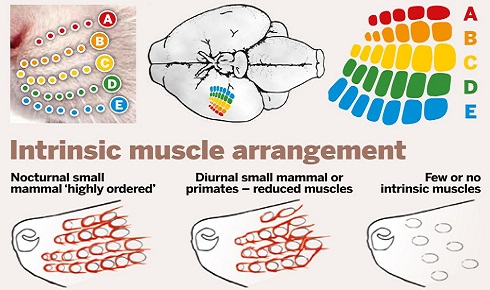 Fig 1: The grid-like pattern of the whiskers is mirrored by topographic structures throughout the brain

Whiskers don’t just sense – they also move. Every single whisker has its own individual muscle, called an intrinsic muscle, that forms a sling around its base and attaches to the base of the follicle behind. These intrinsic muscles mean the whiskers within a row are linked together. Contraction of these muscles moves the whiskers forwards and relaxation causes them to move backwards. Many rodents, such as mice, move their whiskers almost constantly at a rate of up to 25 times a second. This is one of the fastest movements that mammals can make.

Interestingly, this architecture of intrinsic muscles is conserved from marsupials all the way to nocturnal primates. This makes us think that the very first mammals would have had moveable whiskers. This makes sense, as the first mammals were likely insectivorous, and thought to be nocturnal and arboreal.

Unfortunately, whiskers are rarely preserved in fossils, although some pits on the snouts of Therapsid fossils (a group of animals that includes mammals and their ancestors) have prompted researchers to wonder if they may have had whiskers. However, such pits are also found in some reptiles, which lack whiskers.

Therefore whiskers are probably only a mammalian trait. The rictal bristles of birds could be considered to be similar structures to whiskers, although these are modified feathers, rather than tactile hairs. So although they may have a similar function, they are likely to have quite different origins.

While many biologists and neuroscientists have explored how whiskers sense, we do not know much about how they move, as many whisker specialists are small, live in the dark or underwater, and move their whiskers very quickly, making them difficult to study.

As a sensory biologist I am interested in working out how animals move their whiskers and why they move them like they do. I approach this in a comparative way, looking at lots of different species. I also look at both muscle anatomy, whisker mechanics and behaviour.

Studying whisker behaviour involves filming. However, as most whisker specialists are either small, nocturnal rodents or aquatic pinnipeds, this presents significant challenges when attempting to record whisker movements.

I have filmed both harvest mice and pygmy shrews, which are both exceedingly small mammals. Not only are their whiskers the size of small hairs, but they also move them up to 25 times per second. Therefore, I use a high-resolution, high-speed video camera recording at 500 frames per second to clearly image their whiskers. I also use an action sports camera, filming at 240 frames per second, for larger animals.

As well as being fast moving, many of these animals are also rather elusive and shy. A European dormouse, for instance, can freeze when startled and not move for 45 minutes, which means filming them requires a non-invasive, quiet, dark filming set-up. I use specialised infrared lighting for filming nocturnal animals. To the animals, it remains dark and they roam around more naturally, but there is still enough light for the camera to clearly image their whiskers. 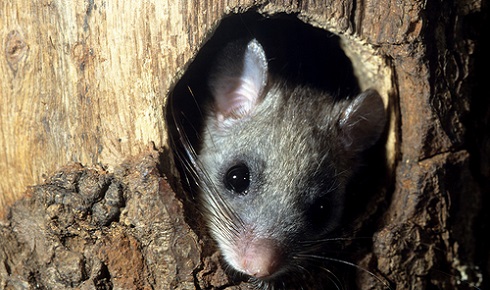 During summer 2019 I travelled around the UK filming many whisker specialists including otters, foxes and many small, nocturnal rodents and mustelids at the Wildwood Trust in Kent; porcupines at Reaseheath Zoo; ferrets and rabbits at Williamson Park Zoo; and harbour seals at SeaQuarium Rhyl.

To analyse the footage I work closely with computer scientists who have developed automated and manual whisker trackers for me. This means I can precisely measure the angles of the whiskers in relation to the animal’s head, and from this angle data calculate how much they move, how fast and how often.

Understanding what these mechanoreceptors ‘feel’ is complex and likely to vary from species to species. For example, a thick undulating seal whisker will have different signals to a thin, smooth harvest mouse whisker. I am now working closely with mathematicians and engineers to try to work out whether different animals are likely to feel things with their whiskers differently. If they do, then how might different animals move their whiskers to get the best signals from them?

I think that understanding questions in whisker control can help us to understand why animals behave the way they do. Comparing anatomy and movement between lots of different species will also shed light on the evolution of the mammalian sense of touch.

Touch sensing is understudied compared with other senses such as vision and hearing, but with advances in camera and tracking technology we are now able to characterise touch sensing in mammals like we have never been able to before.