Every October thousands of students from around the world gather in Boston, USA, for one of the largest science competitions in the world, the International Genetically Engineered Machine Competition (iGEM). The competition brings together 375 teams from 45 different countries and is the closest thing there is to the Science Olympics.

Multidisciplinary teams (some made up of students still at high school) work over the summer to design, build and test a system using interchangeable DNA parts. The teams come together in October to present their work and compete at the annual Giant Jamboree in Boston, attended by more than 6,000 people.

Teams use and develop BioBricks – standardised, open-source genetic components that form an enormous registry of parts available to all entrants. Working with BioBricks poses an exciting challenge for the undergraduates who would otherwise not have the opportunity to use this technology. It also helps to further standardise the tools of synthetic biology.

The teams look to tackle real-world problems, in their communities or beyond, such as rapid diagnosis of disease, antibiotic resistance or climate breakdown. Projects this year included magnetic bacteria engineered to pull plastic particles from the sea, an ‘astropharmacy’ to endlessly produce drugs in space, wearable living opioid detectors and ‘robotised’ algal cells. Many teams in the past have gone on to start successful businesses. 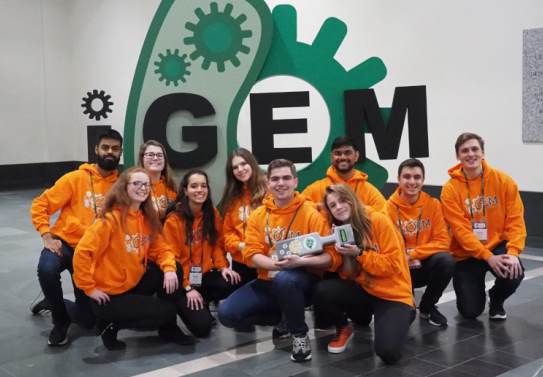 This year our group of undergraduate students from the University of Nottingham came together to develop a system to ‘sniff out’ Clostridium botulinum when food preservation and packaging methods fail and allow growth of the dangerous bacteria. These bacteria can cause a type of food poisoning known as botulism that can result in paralysis and even death.

C. botulinum is an anaerobic bacterium, meaning it can grow in conditions that completely lack oxygen. The organism is notorious for producing the deadly botulinum neurotoxin. There are seven different types of the botulinum toxin: A, B, C1, D, E, F and G – human botulism is only caused by types A, B, E and, rarely, type F. The toxin, when in the nervous system, prevents the release of messenger chemicals, resulting in paralysis. Infection with C. botulinum or ingestion of the toxin causes the disease botulism, a serious illness where paralysis normally spreads from the facial muscles and that can be fatal if breathing muscles are affected.

The C. botulinum bacterium can also form spores that are highly resistant to harsh environments. Consequently, when they contaminate food that has been improperly prepared, the spores can germinate into toxin-producing bacterial cells that when ingested cause botulism.

Food companies have to subject their products to rigorous trials to determine expiry dates in a process called challenge testing. This type of testing involves injecting test food with bacteria in a laboratory to determine whether the food-preservation method reliably prevents bacterial growth. After inoculation, the food is kept for a certain period of time under specific storage conditions before samples are tested. The gold standard for detecting the botulinum toxin protein is known as the enzyme-linked immunosorbent assay (ELISA).

The assay determines whether the bacteria have been able to grow and produce the toxin, and can be used to determine the subsequent shelf life of that product. However, challenge testing is very expensive, as there are large amounts of food replicates involved, and the preparation and extraction of the toxin for the ELISA assay is complicated. Botulism outbreaks are estimated to cost the food industry about £25m for every person poisoned. Unfortunately, not all companies, especially smaller ones, can afford to undertake challenge testing.

Fatally flawed foodstuffs
Foodborne botulism is rare, but when it occurs it is serious. Only 62 cases were formally recognised in the UK between 1922 and 2005, with the largest outbreak in 1989. Contaminated hazelnut yoghurt resulted in the hospitalisation of 27 people and the shutdown of a major company. Yoghurt, being acidic, would usually inhibit C. botulinum growth, but a pre-roasted hazelnut mixture had been stored at room temperature for several months. This allowed the bacteria to grow before being added to the yoghurt, which was assigned a 25-day use-by date.
An outbreak of foodborne botulism in 1982 caused what was at the time the largest recall of a product in the US Food and Drug Administration’s history, requiring the mass recall of millions of cans of Alaskan salmon. The cause was found to be a “small dented-in black spot and tiny hole” created by a specific type of can manufacturing machine used in multiple factories. The defect allowed C. botulinum spores to contaminate the cans and the filling of the cans resealed the puncture holes, creating an anaerobic environment perfect for the bacteria to grow in.

In previous years Nottingham’s iGEM teams have worked on projects involving bacterial security with Escherichia coli and engineered bacteriophages in the treatment of Clostridium difficile infections.

Our team this year comprised 10 science-loving undergraduates studying a range of degrees, from biotechnology to computer science and mathematics. We entered iGEM to develop our technical skills, learn more about synthetic biology and experience life in academia. Our project used just under 30 iGEM parts to develop a strain of bacteria that could be used to safely monitor the likelihood of botulinum neurotoxin production in food. 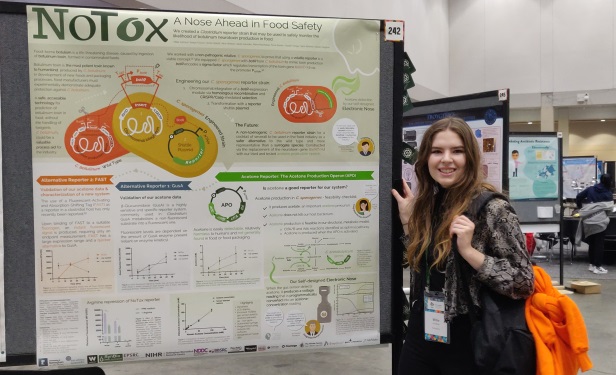 For our proof-of-concept studies we used the rarely toxic surrogate strain Clostridium sporogenes in place of the highly toxic C. botulinum. The anaerobic C. sporogenes is already used in industry as a surrogate for C. botulinum due to its similarities to the pathogen.

The strain was modified to produce the volatile gas acetone in the presence of a transcription factor known as BotR, the signalling molecule that induces the bacterium to start producing the toxin. After the BotR gene was introduced to the bacteria a plasmid was introduced with reporter genes that gave off acetone when BotR was present in the cell. The gas could then be detected using an electronic ‘nose’ designed and created by the team. Once the sensor detected the acetone it induced a voltage that could be converted to acetone concentration and displayed on an LED screen.

Our mutant C. sporogenes model proved it is possible for BotR to drive expression of a reporter gene. This paves the way for using the same method to create a C. botulinum strain that produces acetone in place of the botulin toxin. The acetone could then be detected in the headspaces of inoculated food products that have modified atmospheres or are vacuum packed. The system could then be used to test whether food packaging will support the production of botulinum toxin, serving as proof of concept that reporter-strain technology can be useful in botulism prevention.

With this alternative method for detecting toxin production in food packaging, the team aims to provide a cheaper and faster alternative to current ELISA food-testing methods and could replace the need for animal testing, which still takes place in many countries.

The last hurdle for the Nottingham iGEM team was to demonstrate what they had achieved over the summer to the iGEM judges at the Jamboree. The Giant Jamboree is held over four days, with the first three devoted to judging hundreds of projects and an awards ceremony on the last. 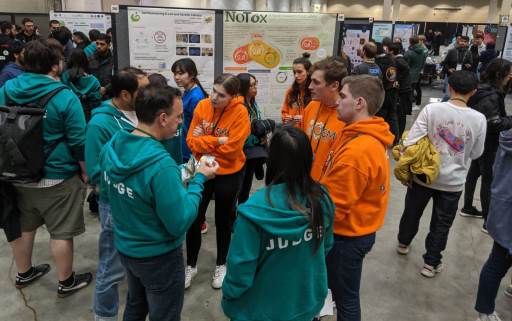 Judges from the competition assess the Nottingham team, one of nearly 400 teams at iGEM 2019.

Each team had to give a 20-minute presentation (plus five minutes of answering questions) and display their project on a scientific poster. Nottingham’s project ‘NoTox – a nose ahead in food safety’ was presented on the first day by second-year undergraduate students Saniya Crouch, Millie Johnson, Alice Hodson and Jacob Gausden.

The end of the presentation marked the start of the poster judging period. The judges asked numerous questions including how we assembled our constructs and tested our reporter strain. The judges were particularly impressed with the team’s self-designed and constructed electronic nose.

The remaining time at the Jamboree gave the Nottingham team the opportunity to attend plenty of other presentations and examine other teams’ posters. The group from Nottingham especially enjoyed presentations by other university teams they had collaborated with, including Oxford, Newcastle, Sheffield and Manchester, as well as Carroll High School. When not watching presentations, we attended the Jamboree’s career fair, with biotechnology and synthetic biology companies represented, and workshops hosted by the likes of the FBI and NASA.

Finally came the closing ceremony and the results. All the hard work paid off, and Team Nottingham 2019 can now proudly boast a Gold Medal along with nominations for ‘Best Food and Nutrition’ and ‘Best Human Practices’.

Team Nottingham would like to thank all the supervisors, sponsors and the organisers of the iGEM competition for their advice, support and contributions. The experience has been unique and greatly successful, but would not have been possible without the generous help of the large team of people supporting them at SBRC-Nottingham, University of Nottingham.