The introduction of just one flightless midge to Antarctica could have a huge effect on the region’s simple terrestrial ecosystems. Researchers and other visitors must be careful not to further disrupt the planet’s most isolated continent, write Jesamine Bartlett and colleagues

Antarctica is the least accessible continent on the planet to both flora and fauna. It has remained isolated from the rest of the world, and thus any potential invaders, by the vast expanse and circumpolar current of the Southern Ocean, as well as the strong westerly winds of the Roaring Forties, Furious Fifties and Screaming Sixties. These create a barrier to the continent, preventing much biological life from arriving by air or sea and colonising the land.

The species that do arrive, via whatever means, are faced with year-round low temperatures, short summers and desolate, infertile soils. Nevertheless, ancient and unique life has persisted in the Antarctic for millions of years, dating back to the final break-up of the Gondwana supercontinent around 30 million years ago.

In fact, contrary to popular belief, Antarctica is a diverse continent, with 16 distinct biogeographical regions and many endemic species. These include one insect: the small, flightless, detritivorous midge, Belgica antarctica, which occurs on the Antarctic Peninsula and neighbouring islands, and is the largest terrestrial organism on the continent. (The charismatic vertebrates that Antarctica is known for, the seals and penguins, are marine species.)

Living on land in Antarctica is certainly harder than in the Southern Ocean. Without the buffer of a comparatively warm (or at least thermally stable) sea and its rich food supply, terrestrial life faces some of the harshest environments we know of. To be a successful invader of these terrestrial ecosystems non-native species must be already adapted to conditions of acute and chronic cold exposure, as well as a lack of water, which either remains trapped in ice during long dark winters or is lost through the low humidity, both during summer and in frozen microhabitats.

For those that are pre-adapted to survive the cold and have a flexible life history to cope with the short summer seasons, human movement is providing the means of rapidly crossing the previously inaccessible natural barriers. Now that we understand more about the unique biogeographic regionalisation of the Antarctic, movement of native species within Antarctica is of concern, as is that of imported aliens from the rest of the world.

The most persistent invader in terrestrial Antarctica to date is also a midge, and one that is already accustomed to a cooler lifestyle. Originating from South Georgia, a subantarctic archipelago in the south Atlantic, Eretmoptera murphyi is thought to have been introduced accidentally to Signy Island in the maritime Antarctic during a 1960s transplant experiment that was investigating whether various plant species could survive further south. 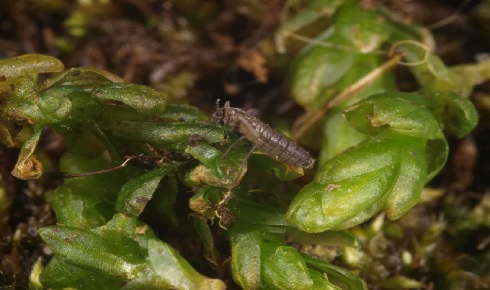 E.murphyi, the cold-adapted midge that could have a large impact on terrestrial ecosystems across Antarctica. (Image courtesy of Roger Key)

In common with the native midge, B. antarctica, on the Antarctic Peninsula, E. murphyi is a flightless, soil-dwelling detritivore and the two species are closely related, albeit with about 60 million years of separation. Another similarity between these species is that E. murphyi is able to withstand the harsh Antarctic winters through a suite of pre-adaptations. However, in contrast to the sexual reproduction of B. antarctica, which relies on environmental cues to synchronise adult emergence and swarming to successfully mate, E. murphyi is asexual (parthenogenetic). This means that only females exist, so they can emerge much more sporadically and flexibly throughout the summer season.

For two decades the introduction of the small and inconspicuous E. murphyi to Signy Island went unnoticed until, in the early 1980s, reports of adult midges wandering the moss banks near the old experimental transplant site emerged. Since then the midge has spread to occupy an area of at least 85,000m² and it seems that humans are once again implicated[1]. Residing in the soil, minuscule larvae are probably moved around on the treads of researchers’ boots, and the species’ presence shows a strong association with footpaths. Wherever there is suitable moss and peat for it to inhabit, it seems to eventually colonise, with our aid.

Our most recent findings suggest that while the midge itself is small its impacts are not. Indeed, E. murphyi is an ecosystem engineer and its introduction to Signy has made it the largest terrestrial animal, and only insect, on the island. The native fauna, which consists of a few species of soil mites, springtails and micro-invertebrates (such as nematodes and tardigrades), while also being detritivores, are outsized and often greatly outnumbered by the midge, which can have densities of 150,000 larvae per square metre in places.

Such populations are able to consume almost an order of magnitude more organic matter than the entire native fauna at the sites where they co-occur[2]. Not only is this affecting the rate of litter turnover, but it is also increasing the nitrate content of the soils. One of our key findings suggests that the nitrogen levels made available by the midge are akin to those seen in association with native seal aggregations.

So this alien midge has brought a function to the terrestrial ecosystem of Signy Island that previously did not exist: E. murphyi is effectively doing the job of an earthworm in an ecosystem that has never had such an organism.

This has implications not only for local fauna and flora, particularly the two rare Antarctic flowering plants that would relish greater nitrogen availability, but also other invading species. For example, more fertile soils mean non-native seeds have a greater chance of establishing. Thus, despite being seemingly innocuous, this invertebrate can have a large impact on these fragile and simple ecosystems.

On the South Shetland Islands, and more recently the Antarctic Peninsula, scientists and facility managers have been battling with the invasive grass Poa annua, another species that is pre-adapted to survive in cold and stressful environments. Models suggest that, aided by climate change, this grass will probably move further and further south[3]. Our studies of E. murphyi suggest that it would do the same if given the chance to hop over to the Antarctic Peninsula.

As more ice-free land becomes available[4] and human activity in the Antarctic regions increases, it is almost inevitable that introductions of non-native species will accelerate. A winter crane fly, Trichocera maculipennis, has already taken up residence and is spreading on King George Island just off the Antarctic Peninsula[5]. While humans probably introduced this insect to the Antarctic region, its ability to fly means it may be less dependent on humans for future dispersal. 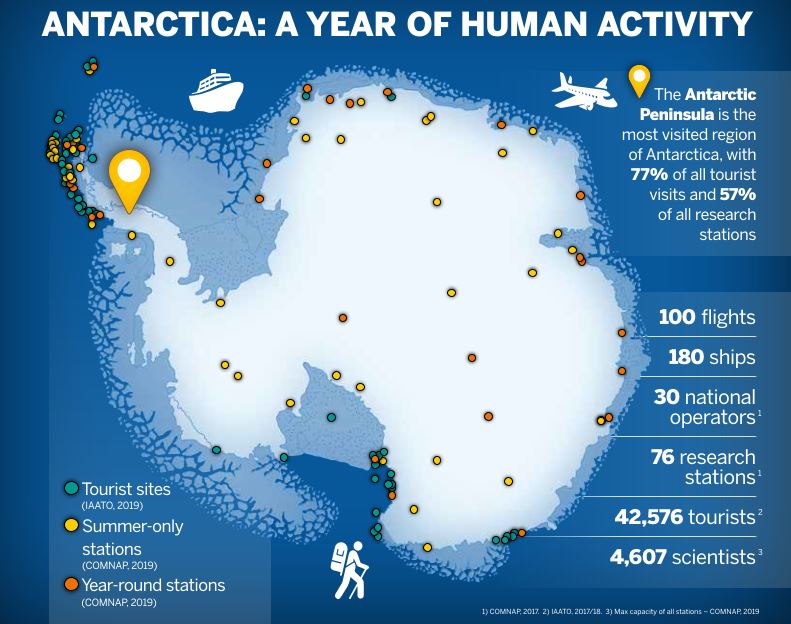 Sea change
How human activity moves species to Antarctic waters
• Ships, especially icebreakers, traverse the whole world, from the Arctic to Antarctica. Their hulls are generally only cleaned every one to three years and they transport diverse biological communities wherever they go, even though measures to reduce biofouling are frequently used.
• Biofouling from animals and seaweeds growing on the hulls of ships is probably the most important vector for transporting new marine species into Antarctic regions, but quantitative research on such vectors, pathways and potential invasion hot spots is scarce.
• Approximately 180 vessels on 500+ voyages travel to Antarctic waters each year across the tourism, fishing and research sectors, representing a five to tenfold increase since the 1960s [8]. The Antarctic Peninsula may be particularly at risk as it receives most ship-based traffic and is showing rapid climate and environmental change.
• Evidence of non-native marine species in the Antarctic region is limited and their potential risk is largely unknown. But four non-native species have been reported free living in Antarctic waters and were probably introduced through human activities: the great spider crab, the brown bryozoan/common Bugula, the vase tunicate (sea squirt) and the pink-mouth hydroid. Only one species (a gutweed) is considered established, but the mechanism behind its introduction is unknown.
• Many species have been found living on the hulls of Antarctic-going ships, ranging from barnacles and bryozoans to crabs and seaweed, as well as mussels, worms and amphipods. Any marine biosecurity measures to protect Antarctica will need to be very different from the terrestrial approaches. A vacuum cleaner won’t remove a barnacle!

Ironically, back on South Georgia (E. murphyi’s native and endemic range), two alien predatory carabid beetles are decimating the local invertebrate fauna, including possibly E. murphyi itself. What is happening on the warmer isles of the subantarctic must be heeded as a warning for the Antarctic – that is, that we cannot ignore the little things, the non-charismatic microfauna that are nevertheless capable of engineering fundamental changes to polar ecosystems[6].

Antarctica is governed by the Antarctic Treaty, an international organisation of 54 signatory countries that aims to ensure the region is used for peaceful and scientific purposes only. While nearly 10 times more tourists than researchers visit the Antarctic region each year, it is the national operators there for research purposes that have been shown to present the greatest risk of introducing species. Tourists spend limited time on land and, unlike the national operators, generally do not import cargo and food to the continent. 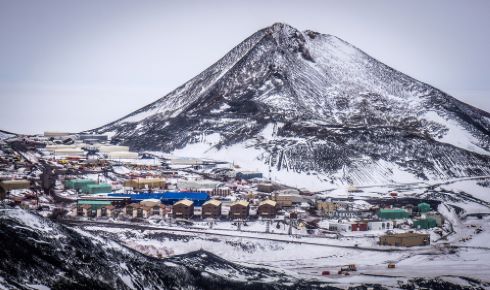 The primary footprint of human activity in Antarctica is currently concentrated around the northern Antarctic Peninsula and South Shetland Islands, a region that has also been warming the fastest through the late 20th century and the area of choice for new countries looking to join the Antarctic Treaty and establish bases[7].

This footprint is only going to increase and therefore we need to urgently ensure that biosecurity measures are strong, effective and, most importantly, enacted by every operator in the region.

In theory just one larva of E. murphyi was needed for the species to establish on Signy Island and only one would need to be introduced to the peninsula for the same thing to happen there.

This case is a bellwether for many other microfauna that are capable of packing an ecological punch if ignored. Nevertheless, for now Antarctica remains the least invaded continent on the planet and stands in stark contrast to the remarkable changes we have wrought on every other continent to date. It also represents humanity’s last chance to demonstrate that we can manage and mitigate the risks of invasive species at a continental scale. If we do not, climate change will open the door to the world and our neglect will trample the aliens right through on our boots.

Jesamine Bartlett MRSB is a PhD student with the University of Birmingham and British Antarctic Survey (BAS) in the UK studying E. murphyi.
Pete Convey is a terrestrial ecologist with 25 years’ experience of working with the BAS and in a wide range of polar environments.
Arlie McCarthy is conducting doctoral research at the University of Cambridge on the risk posed by invasive marine species in Antarctica.
Dr Scott Hayward MRSB is a senior lecturer in molecular ecophysiology at the University of Birmingham. His research group seeks to understand how organisms cope with variable and stressful environments.

1) Bartlett, J. C. et al. An insect invasion of Antarctica: the past, present and future distribution of Eretmoptera murphyi (Diptera, Chironomidae) on Signy Island. Insect Conservation and Diversity. In review (2019).