In one area of Thailand, the mangrove tree A.marina grows far larger than anywhere else on the planet. Ecologist Gordon Maxwell says granting this unique ecosystem World Heritage Site status could help highlight the importance of other mangroves around the world

This story takes us to the Ranong mangrove forest in southern Thailand, just under 600km south of Bangkok, where I became the first non-Thai to see the world’s biggest individual Avicennia marina mangrove (see the opening image, above). Mangroves as a vegetation type consist of 70 species of higher plants – trees, shrubs, ferns and palms – that can cope with the salinity brought by tidal inundation on a minimum of one occasion a year to the soil in which they grow. Most inundations are far more frequent than this – in some areas a daily tidal inundation is common.

Avicennia marina is the world’s most biogeographically widespread mangrove tree, with a distribution that includes South Africa, the Red Sea, Southeast, South and East Asia, Australia and some Pacific Islands. It is found as far south as Ohiwa on New Zealand’s North Island. Throughout nearly all of its range, A. marina is encountered as a small tree.

Since 1978 I have visited or collaboratively worked at every location where A. marina grows. These habitats are diverse ecologically and climatically, and included the cold-inhibited A. marina of New Zealand and Japan, the disturbed habitats of southern China, the many degraded or rehabilitating mangrove sites of Southeast Asia, the small but relatively untouched groves of A. marina forest in Brunei, and the squat A. marina shrubs on the hypersaline mud flats of Taiwan. Typically, it is the negative impacts of human activity that keep these trees small. Rarely do they reach more than 5m tall.

As such, I experienced astonishment, disbelief and excitement to be one of the few people ever, and the first foreigner (non-Thai), to touch the world’s biggest A. marina tree. The dimensions of this outstanding specimen tell the story: Thailand’s super Avicennia of Ranong is 35m tall and has a girth of 3.52m. Even trees in isolated, undisturbed and frost-free locations in the far north of New Zealand are lucky to grow taller than 5m before native marine borers weaken the wood and the old Avicennia falls. In Hong Kong, squat, almost stemless, shrubs of 1–2m tall look a planet away from the Thai giant yet, on paper, both Ranong and Hong Kong are tropical locations.

Age is challenging to estimate in Avicennia, as convenient annual wood rings are not formed. Wood formation seems to be endogenous and not influenced by seasonality. Using girth as our guide, Thai forest scientists estimate the tree shown in the opening image is between 150 and 180 years old.

Remarkably, the giant tree is not alone: it is but one in a unique grove of giants. The A. marina community here occupies the seaward front of a massive, biodiverse mangrove forest ecosystem of 175ha in area. The presence of such outstanding specimens of A. marina (or ‘Sa-Mae-Tha-Lay’, in Thai) underscores the global importance of the mangrove forest ecosystem that nurtured these trees.

Currently, the Department of Marine and Coastal Resources (DMCR) of Thailand is preparing an application to confer World Heritage status on the now precious mangrove forest ecosystem that nurtured these examples of the world’s biggest Sa-Mae-Tha-Lay. That an august Avicennia marina could reach what must come close to the biological potential for this species is truly inspiring. Moreover, World Heritage status for this forest will provide a living model that can furnish the scientific foundation for the challenges of mangroves’ eco-restoration globally. 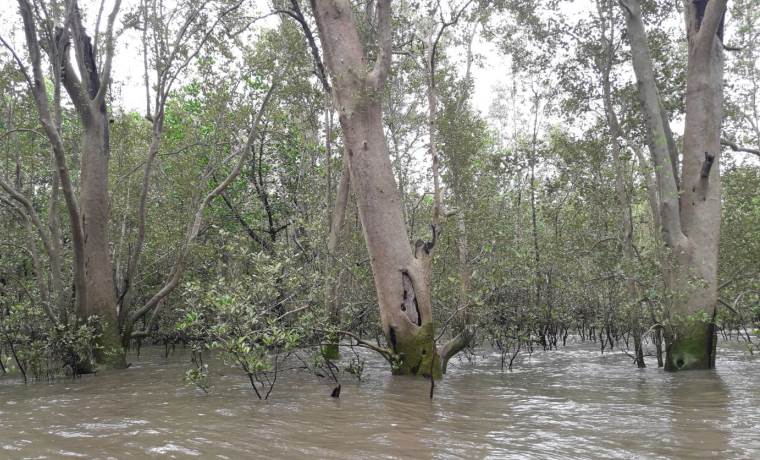 A.marina experiencing one of its daily tidal inundations.

A. marina seedlings are aptly described as propagules because they are, in fact, precociously germinated seedlings that fall from the parent tree like bean-sized fruits. The propagules are buoyant and can do alcoholic fermentation and some photosynthesis within their cotyledons.

Some establish beneath the parent tree, many get eaten by hungry crabs and a few may drift far and wide. Those that establish within the parental grove face, like the luckiest and most robust of mature trees, a whole complex of difficult and diverse ecological challenges.

These include: uncertain tidal baths, sudden fluctuations in salinity (from full sea water of 3.4% salinity to 0% when a tropical downpour coincides with low tide), anaerobic substratum or dynamic osmoregulation conditions, plus the crab consortium and troops of monkeys at low tide, the nibbling of fish at high tide and, of course, the challenge of growing tall in a sloppy, waterlogged, unstable muddy soil. 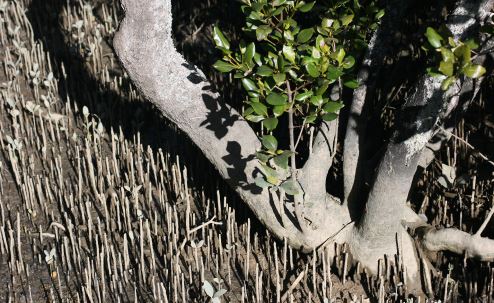 A. marina is the world’s most biogeographically widespread mangrove of any form

Substantial prop roots protrude from the trunk. Unseen, a massive and extensive below-ground root system connects thousands of finger-like aerial roots (pneumatophores) of which cable, absorptive and anchoring roots exist. Collectively, this massive investment of biomass into a root system is in balance with the visible aerial biomass.

These trees are equipped to withstand tidal ebb and flow, coastal storms and even tsunami events. Their contribution to ecological services does not end there. As can be imagined when one thinks about Figure 1 and the combined above-and-below-ground biomass, mangrove trees such as Avicennia are experts at carbon capture. Herein lies another value of these growing tall in the 21st century: climate change may well be the top issue facing our ecosphere today. 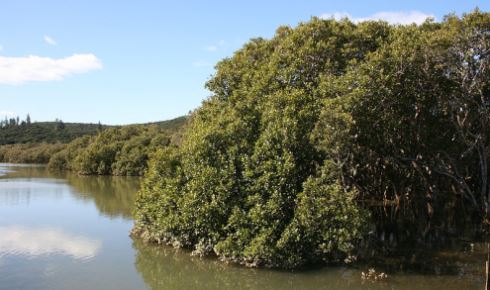 It is natural for many to look upon mangroves as distant, mostly tropical, plants. But Chapman[1] cites reports of Avicennia, Acrostichum (mangrove fern) and Nypa (mangrove palm) from the English Tertiary, noting the occurrence of mangrove in the London clay. With current trends in global warming, mangrove propagules may one day make it to the estuarine shorescapes of Britain once more.

Mangrove ecosystems at the peak of their ecological health provide many eco-economical assets, with their role in coastal protection and as fishery nurseries the most well established. I have met mangrove folk in Malaysia, Thailand and Vietnam who obtain their herbal medicines from mangroves, and recent work by the International Society for Mangrove Ecosystems has reignited interest in biomedical properties of mangrove extracts[2]. This area offers many enticing lines of enquiry and we may see a dollar value as an added attraction to the wisdom of World Heritage status for the Ranong mangrove forest.

In New Zealand, A. marina (the country’s only mangrove) is known by its Maori name, manawa. Translated, this word means ‘heart’, and local traditional wisdom teaches that manawa is the heart of the harbour and ‘mother’ to many fish. Elsewhere, during the Vietnam War, hungry village people even cooked the fruits (seedlings) of A. marina as food.

Recently, the narrow interests of some pressure groups have asked for A. marina to be eradicated in New Zealand, claiming it causes sedimentation and destroys beaches (when in fact, mangrove expansion is a symptom rather than a cause of sedimentation). Activity from these pressure groups has brought mangroves into public focus in New Zealand, but public hearings on a bill to authorise mangrove removal demonstrated that most citizens were aware of their many ecological values[3].

A World Heritage title for the impressive mangrove forest ecosystem in Thailand’s Ranong province would have a positive influence on the sister mangrove forest of the Sundarbans, shared by India and Bangladesh. Local people depend directly on this huge mangrove for their daily needs, including food, fuel and medicine.

Clearly, the iconic presence of a grove of mangroves displaying the splendour of an expressed biological potential can do much to inspire all those who are mindful of the multifunctional eco-economic values of large, intact natural ecosystems. The time has come for World Heritage status for Avicennia marina and the mangrove forest ecosystems that underpinned its attainment.

Professor Gordon S Maxwell FRSB teaches the postgraduate course ecological conservation and environmental assessment at the Open University of Hong Kong, is a consultant to the DMCR and International Environmental Park Foundation in Thailand, and a life member of the International Society for Mangrove Ecosystems. He has been researching mangroves since the 1970s.