What is the real cost of the Suez Canal?

Invasive species travelling through this waterway are causing health and economic problems across the Mediterranean – we must properly assess the impact of such bioinvasions, says Bella Galil

Three Libyan fishers died this summer after eating silverstripe blaasop. Sadly, they were not the first, nor likely the last, to suffer the effects of the potent neurotoxin tetrodotoxin (TTX) found in the gonads, liver, muscle and skin of this pufferfish. Following the establishment of the silverstripe blaasop in the Mediterranean Sea in the early 2000s, there have been scores of severe TTX poisoning cases.

Despite official prohibitions in some Mediterranean countries, the pufferfish is still being sought by recreational fishers and occasionally commercially marketed. A survey[1] examining awareness among anglers, fishmongers, restaurant staff, medical staff and the public in Antalya, a major Turkish tourist hub, found most customers were ignorant of its lethality and the majority of local physicians were unfamiliar with symptoms of pufferfish poisoning. This is what can happen when dangerous organisms from distant seas establish in new waters. 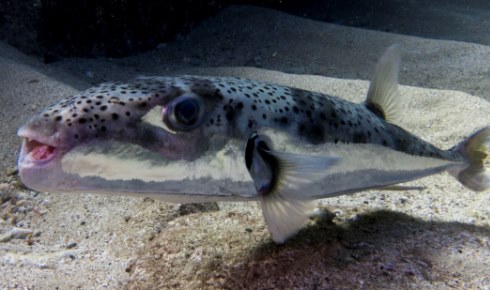 Lagocephalus sceleratus, a highly poisonous pufferfish that has broadened its range from the Indian ocean to the Mediterranean via the Suez Canal, a route known as Lessepsian migration.

The pufferfish is not the only health hazard of its kind. Ten poisonous or venomous species have entered the Mediterranean Sea through the Suez Canal. For most of the year, the current along the canal flows north in the direction of the Levant, in what has been described as a ‘conveyor belt’ of species arriving from the warmer Red Sea[2].

Along the route of the ever-widening canal, there are no longer natural differences in saline that once acted as barriers to the movement of marine organisms. Although estimates vary, it is thought that up to half of the 800 non-indigenous species found in the Mediterranean have arrived via the Suez Canal.

Annual swarms of nomadic jellyfish (Rhopilema nomadica) in the Mediterranean have caused numerous envenomation victims to suffer painful swelling and itchy skin eruptions and, in rare cases, anaphylactic reaction and death. In summer 2009, 815 hospitalisations due to envenomations were recorded along the southeast coast of Turkey alone[3]. In summer 2017, a swarm stretching along the entire length of the Mediterranean coast of Egypt spoiled Eid celebrations for many thousands of holidaymakers. Thought to have first been introduced to the Med some time in the 1970s, R. nomadica has now spread as far west as Sardinia, Sicily, Malta and Tunisia. 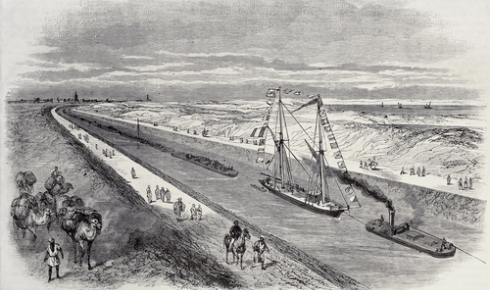 For many years after the Suez Canal opened in 1869, hyper-saline lakes and freshwater rivers crossing the waterway prevented most marine organisms from surviving the length of the canal. The effect of these natural saline barriers was greatly reduced as the canal was widened repeatedly throughout the 20th century.

In recent years, the population of lionfish has also increased manifold, including along coastlines popular with tourists, from Cyprus to Sicily. Its sting produces intense pain and swelling that may last for days and can cause anaphylactic reaction after repeated injuries.

As a result of climate warming and the enlarged Suez Canal, the species already present will spread, and ever-more venomous and poisonous species from the Indian Ocean and the Red Sea will arrive and settle.

Healthcare authorities must assess and manage marine health hazards, ecologists must link the trends in alien species’ presence and abundance to impacts on local ecosystems, economists must assess the costs of these impacts, and environmental authorities need to attain accurate data and detailed risk assessments in order to mitigate these problems. Because these hazards are not going away.

Bella Galil is an expert on marine bioinvasions and a member of the Steinhardt Museum of Natural History, Israel National Center for Biodiversity Studies, Tel Aviv University.