For the last 10 years, Susan Cheyne and her colleagues have been setting camera traps to find out more about Borneo’s elusive cat species. She tells The Biologist about the highs and lows of trying to capture images of these rare and endangered species

Our camera trap adventure started more than 10 years ago in late 2007 with a question: did clouded leopards live in Bornean tropical peat-swamp forest? Our focus was the long-term research site in the Sabangau Forest, one of the most important areas of rainforest remaining in Borneo.

This tropical peat-swamp habitat is the largest unfragmented area of forest remaining in Borneo’s lowlands and supports globally significant populations of threatened species, including the largest known population of the critically endangered Bornean orangutan (Pongo pygmaeus wurmbii) in lowland Borneo and the endangered white-bearded gibbon (Hylobates albibarbis). Its vast peat deposits cover an area of 6,000km² and reach depths of 15m, making this one of the largest terrestrial carbon stores in the world.

Since 1999, Borneo Nature Foundation (BNF) has been working to conserve this forest, with a focus on the apes, and our venture into camera traps enabled us to learn more about the biodiversity in this forest. 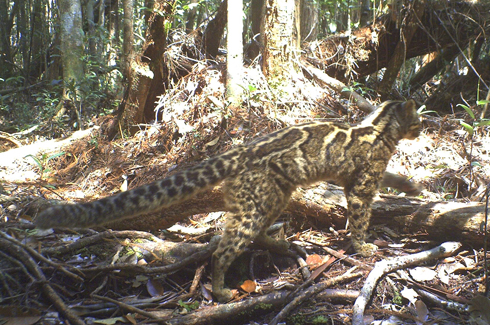 A marbled cat in Borneo's peat-swamp forest. Courtesy of BNF.

The clouded leopard is one of the least-known members of the felid family. This small ‘big cat’ is known for its striking coat (dotted with large cloud- like spots), long tail and extraordinary climbing abilities. Although relatively small, it is the largest predator on the island and, as such, it has an important role to play in the forests’ ecosystems. Capable of hunting on the ground as well as up in the trees, this wild cat is still one of the rainforest’s most enigmatic species.

The cats are very rare and elusive, and very difficult to study in the wild, which means that a lot of basic knowledge about their ecology is still lacking, despite increased scientific interest.

We did have some anecdotal evidence about their presence in the peat-swamp forest: the father of a BNF coordinator said he had seen Sunda clouded leopards while collecting jelutong rubber in the forest. It was on this evidence that we brought 20 camera traps to Sabangau in collaboration with the University of Palangka Raya, CIMTROP research group and WildCRU, University of Oxford. We hoped to obtain the first proof of clouded leopards living in tropical peat-swamp forest, as well as find out if the four other small cats were there – while getting photographs of all the other elusive wildlife living in this forest. 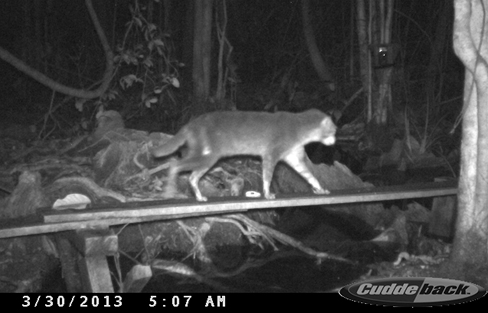 A flat-headed cat. Image by BNF.

It was a nervous start in May 2008: we were all learning about setting up cameras, trying to work out the best locations to place them, and how to protect them from the incessant rain, floods, humidity and wildlife. Very few publications actually provided detail on selecting the best spot to place a camera trap – for example, we found having cameras facing east/west is a bad idea, as they can be triggered by the rising sun. We went through a few protective cover designs before we settled on ones we were happy with – building boxes on sticks for each camera. In hindsight, it was a lot of work and the boxes were really heavy. All the cameras came with instructions in English, which needed translating to Bahasa Indonesia, and we had to remind ourselves constantly to use the American date format, as the cameras were from the US.

We soon discovered ants making nests in the boxes and young pig-macaques using them to swing on. The first cameras had a bright white flash at night and we worried about animals becoming trap-shy; the flash would even startle researchers heading into the forest before dawn. Finally, we had to remind people not to answer the call of nature in front of the cameras!

It took five weeks before we got our first cat: a leopard cat. This was incredibly exciting, but we wanted a clouded leopard. Happily, after eight weeks, in July 2008, we were rewarded with the first ever photo of a clouded leopard in peat-swamp forest and in Sabangau[1]. However, one photograph does not tell you very much about an animal: we needed more images to determine population density, ranging and behavioural information, and impacts of threats – and so we could share these amazing images on social media. 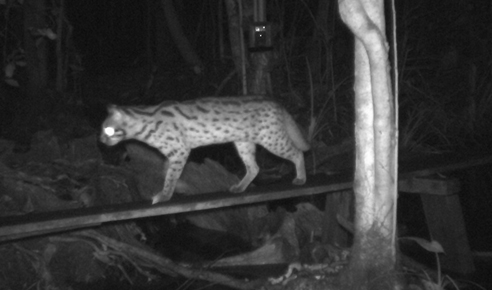 A leopard cat, captured by a BNF camera trap.

By learning more about how to locate cameras, developing techniques and training materials to help new researchers learn, and through a lot of practice, we are now confident in our ability to place camera traps well. We re-use water bottles to cover the cameras (much lighter than wooden boxes) and we can now leave cameras in place longer between checks, thanks to improvements in battery life and SD card capacity.

Clouded leopards are widespread across Borneo, but we are still learning a lot about this apex predator. We have estimated the density of clouded leopards in Sabangau per 100km² to be 0.72 to 4.41 individuals[2]. On average, a male clouded leopard in Sabangau roams over a home range of 35.3km². Within this home range, the males hold a core range, which they use intensively, of 7.7km².

However, none of these males holds an exclusive home range (i.e. a territory) and several males use the same wider area at the same time. This shared use of space is rare in big cats. Normally, felids (clouded leopards included) are solitary and they prefer to be alone in their home range. Any other individual that sneaks into a home range that is not his own will be kicked out by force.

But this is not the case in Sabangau, apparently. The reason why is not yet known, but we do  know that sharing space can only happen if everyone in the area agrees to avoid each other as much as possible. So, while the tactic of most felids is ‘spatial avoidance’, our clouded leopards use ‘temporal avoidance’. That way, they can still all live together without having to interact more than necessary. 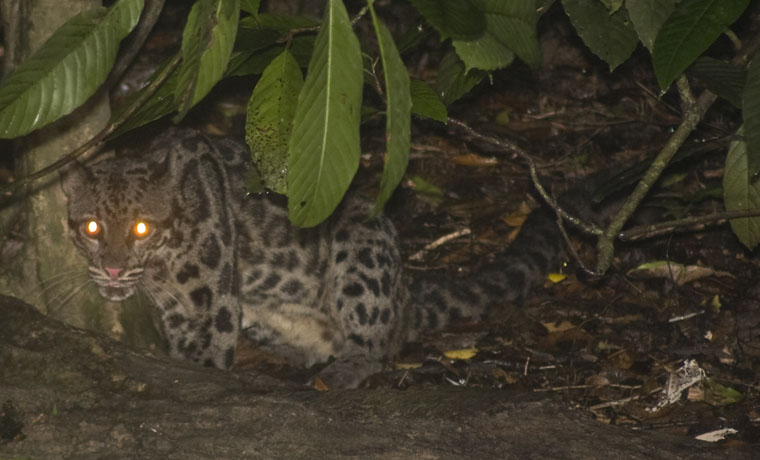 A Bornean Sunda clouded leopard, captured on camera by a BNF photographer.

The smaller cats are far less well understood. Despite 10 years of effort, we have not found bay cats in Sabangau and I may have to admit they are not there. However, in 2016, at a new site north of Sabangau (Rungan), we did find the elusive bay cat, confirming the presence of all five species in this landscape[3].

Leopard cats are the most common species, and the least threatened, probably due to their adaptability and generalist diet. Marbled cats are difficult to study – they are thought to be mostly arboreal so we are missing out on key behaviours as they so infrequently come to the ground. Getting cameras into the canopy is difficult, but not impossible, and we are still working on this aspect of the project.

Flat-headed cats are wetland specialists and prefer forest with water. Their diet likely consists of fish, frogs and small mammals, and they may fill the niche of the fishing cat (Prionailurus viverrinus) on Borneo. Due to this dependence on water, we believe that the devastating fires of 2015[4] may have severely impacted these cats, pushing them away from fire-affected areas. Our preliminary results suggest that the flat- headed cats are returning to these areas, which BNF is actively working to restore. 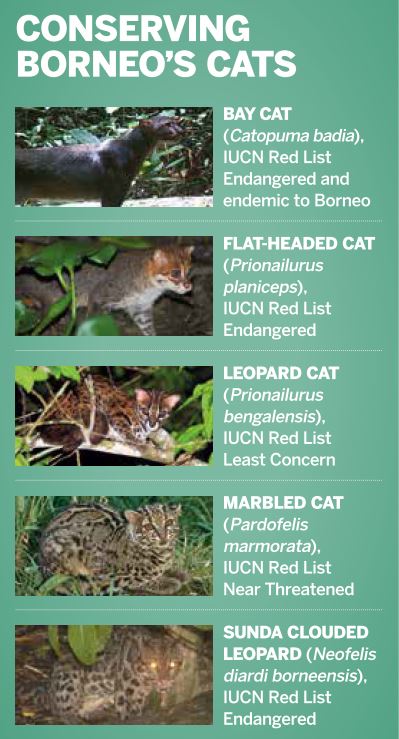 Since 2008, we have had a permanent survey operating in Sabangau. We have carried out short surveys (three to six months) at six sites across Central and East Kalimantan, and established a long-term camera trap survey in the Rungan Landscape. Over this time, we have increased our knowledge of camera traps, techniques, data analysis and biodiversity presence.

Over the last 10 years, we have increased our understanding of clouded leopard distribution and density in peat-swamp forests, shown how fires affect cats, especially the flat-headed cat[5] added new records of the endemic and rare bay cat[6,3] gained insight into clouded leopard range size and overlap, documented the abundance of the smaller cat species, and contributed to Indonesian and international conferences on felid conservation.

Of particular mention is Mr Adul, BNF’s camera trap coordinator. Adul has helped lead this research since the early days[7]. Alongside his knowledge of the forest and the animals, he has been invaluable in selecting locations for cameras, developing new ideas for research, helping students, training other researchers, managing the data and helping launch the Indonesian Forum Macan (Clouded Leopard Forum) to really promote sharing of carnivore information between sites in Indonesia.

Camera traps are a fantastic tool for surveying and gathering data on rare, cryptic and elusive species. When set correctly, the cameras operate around the clock, something no human can do. While we have focused on cats, we have also gained invaluable knowledge about other mammals and birds that inhabit the forest. There have been many wonderful moments when we have caught images of rare animals, such as Sunda pangolins (Manis javanica), and funny moments when pig-tailed macaques (Macaca nemestrina) have taken selfies and played with the cameras. We have had setbacks, but we carry on because each photograph and video is providing more information about the animals in these forests.

We are now experts on setting camera traps, analysing these data and understanding cats in Indonesian Borneo. In 2018, we will start another long-term camera trap project in the mountains and continue our efforts in Sabangau and Rungan. Ten years is a long time to carry out a research project, but we are learning more every day, and the more we learn, the more informed we are to help conserve these wonderful cats.

Hunting, fire, forest clearance and forest fragmentation are all impacting Borneo’s cats. Cats need large areas to survive and linking forests and reducing fragmentation is the key to their conservation. Landscapes and connectivity depend on collaboration between local and international governments, communities, conservation organisations and researchers – for example, a cross- border agreement with Malaysia. As we understand more about cats, we will begin to see how best to connect the remaining forest.

Acknowledgements
We are indebted to our collaborators at the CIMTROP research group, the University of Palangka Raya and Muhammadiyah University Palangka Raya. We are also grateful to our many funders, especially Point Defiance Zoo and Aquarium, the Clouded Leopard Project, Panthera Small Cat Action Fund and the Mohamed bin Zayed Species Conservation Fund.

Susan Cheyne MRSB is a co-director of the Borneo Nature Foundation and has worked in south-east Asia since 1997 and in Indonesia since 2002. Among other work, she initiated the first long-term detailed study of felid and large mammal biodiversity and conservation in Kalimantan, and is a member of the IUCN Cat Specialist Group