'I push people to apply the scientific method to crazy questions'

Tom Ireland speaks to biohacker Andrew Pelling about his unconventional Canadian laboratory, where researchers and artists ask unusual questions about what can be done with living tissues

Andrew Pelling is perhaps best known for videos in which he explains how he grew a human ear from an apple. He is interested in how physical stimuli can be used to manipulate, repurpose and control living systems without modifying their genome.

His unconventional laboratory, the Pelling Lab for Augmented Biology at the University of Ottawa, aims to create functional biological objects that do not exist in nature. Here, you are just as likely to find artists and low-cost, repurposed equipment as biologists and state-of-the-art tools.

The laboratory has developed human body parts made from plants, and methods to control cell fate and organisation using only mechanical forces. It has spun out four startup companies, including one to develop biomaterials for regenerating human tissues.

Why have you chosen to avoid genetic approaches in your work?

I've always been interested in being able to exert control over phenotype without touching the genome. For me, the idea of manipulating a genome or gene and seeing some sort of response in the organisms is kind of obvious. Not easy to do, at all – but kind of obvious. Plus, I was just one of those kids who liked to touch things and squash bugs, and I'm really just doing that with cells now. You can really see the mechanical forces being transmitted through the cells under the microscope and the way they respond. It seems like there are a lot of open questions there and I'm certainly not alone in trying to answer some of them.

What tools and techniques do you use to manipulate and influence cells physically or mechanically?

There's a whole world of tools and techniques out there, and many of them are becoming commercialised and more accessible. A lot of what we do is poking cells, literally with tiny fingers, and seeing how they respond to that physical information.

We do a lot of stretching, too. You put cells on a membrane and start stretching them, and it mimics lung and muscle and those types of environments. Couple that biophysical approach with all the molecular biology tricks out there and you can pull out mechanisms and molecular information from that.

Even a factor such as the stiffness of the underlying substrate matters; it dictates and directs cell biology and physiology. More recently, we started asking how shape influences cells – studies are showing that shape can drive patterning and morphogenesis, things that were thought to only be the result of very complex signalling pathways and gradients. We can recreate them using topography in complex mixtures of cells. 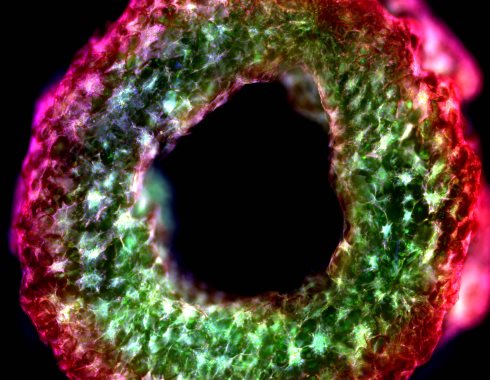 A ring of apple cellulose, used as a matrix for growing human tissue by the Pelling Lab.

Your laboratory has also produced a lot of exciting work using plant substances as the basis for new biomaterials. Why the focus on plants?

We just found they are excellent biomaterials. That work has absolutely taken over the lab – it's all that students coming here want to talk about. What's cool is that you can look at plant ultrastructures and find a lot of similarities with the human body. That notion goes back to our work on shape and how it drives patterning and morphogenesis. Those fundamental studies have helped in this more applied work – we're looking for shapes, structures that we already know are going to do certain things for patterning.

Your laboratory employs artists and engineers as well as biologists. Tell me about how the lab came to be and its unconventional ethos.

During my PhD, I ended up working with a whole bunch of artists – my supervisor was part of this big art-science piece so I was part of the team on that project. I've always found working with artists very similar to working with scientists. Although we use very different language, I find most artists are actually often using something resembling the scientific method while they are exploring an idea or chewing on a problem.

When it came to setting up my own lab, I wanted to test the hypothesis that if I filled the room with creative and industrious people and let them ask whatever question they wanted – as long as they applied the rigour of the scientific method – we'd still end up publishing papers and getting grants and all that academic stuff.

I really didn't think I would get tenure – I thought I would end up getting fired! I figured I might get at least five years to burn through some cash and then I'd have to find another job. But it has actually worked out pretty well. Over the years, we've found that the more diversity we can build into the lab, the more likely it is we'll be asking questions that haven't been asked before and that becomes the driver of the whole place.

You're known for growing an ear from an apple. Was that about trying to get biologists to think outside the box or is that work being developed towards possible biomedical applications?

It's both. It came out of one of our dumb questions: we'd been discussing the plant monster 'Audrey II' in Little Shop of Horrors and whether it would be possible to grow something that had plant material, but also muscles and a vascular system.

A PhD student started asking if we could decellularise a leaf and grow muscle fibre on it, and get that muscle to move or the leaf to contract. It didn't work – it was a complete disaster. Our chemicals weren't getting in through the waxy coating. That same student saw someone eating an apple and realised that you can peel off the waxy skin and use that flesh.

We goofed around growing everything we could on apple pieces for a good year before even thinking about publishing and it slowly dawned on us that it looked like an interesting new biomaterial with lots of good properties.

I raised some money and we started doing some animal studies and it turns out to solve a whole bunch of problems in the biomaterials world. Then we spun out a company. We're planning human trials now, and that's since the first paper in 2014, which is incredibly fast.

What kind of applications?

There's a whole bunch. It's not a miracle material, but many soft and hard tissues in the body in the body are candidates.

I imagine there aren't many labs that study questions raised by the monster from the Little Shop of Horrors.

Ha – I don't know, maybe they do! It's just that my lab encourages it and doesn't dismiss an idea like that. I really push people to apply the scientific method to those crazy questions, and develop a hypothesis. Then let's try it. 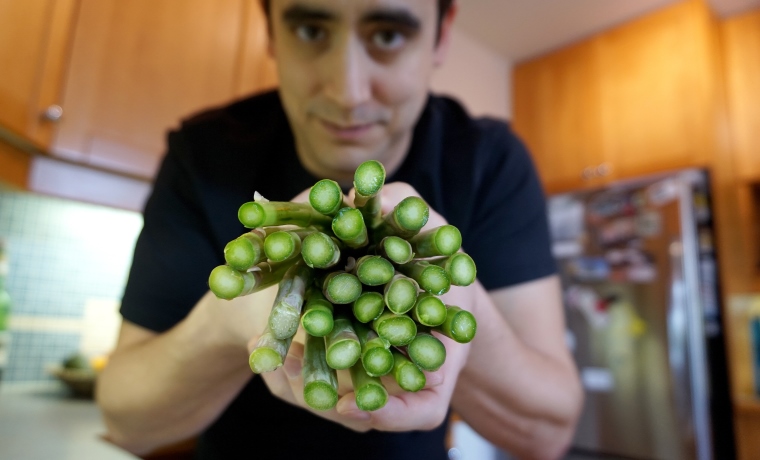 What are the wider aims of your lab?

I'm interested in how we can create living tissue or, one day, organisms that don't occur in nature without touching the genome. Can we take all these lessons about mechanobiology and couple that to our more recent work in unconventional materials to speculate about what these structures and tissues might do or might be like?

We ask people: if you could create an organ, what would it do and what would it look like? And then we try to make it. I don't even have a good answer to that question – you naturally keep thinking of organs we already have and it's hard to think of something totally different. We're really interested in the interface between biology and silicon and electronics. We're trying to see how we can integrate those systems in a way that's a bit wilder.

Is Canada a particularly good country for this approach in terms of funding, regulation?

I'm not sure – people ask me that a lot: 'how do you get away with this?' Our Natural Sciences and Engineering Research Council has a programme called the Discovery Grant, which is really for fundamental, discovery-based research. I tend to do well with that programme, whereas we do not receive funding from our medical research council, even though we're driving human trials. There's a disconnect there – that classic thing where research councils are typically conventional and risk averse.

Because of our public profile, we do tend to get donations, so there are other mechanisms out there through which we can fundraise.

You describe yourself as a biohacker. The term is used by a diverse group of people, from science communicators in community labs to more maverick amateur scientists. What does it mean to you to be a biohacker?

We're in a really interesting time right now. If you look back 30 or 40 years to the start of the first computing revolution, what drove that was people in garages who had access to technology that had become cheap and standardised, two really important words. That led to all that innovation.

We're talking on a device because of that – it has dominated our world. I'm one of many people thinking that if you look at biotech right now, it has moved into garages, parts are cheap and standardised, and on top of that we have the internet, this amazing communication tool.

I think what we're looking at now is the beginning of the future of biology really: bio as technology.

It's probably a couple of decades away from maturing like the computer revolution. But I think then we'll see biotech have the same sort of impact that computers had on our lives. It will be everywhere, driven by people working outside academic systems. So I don't think we should ignore it. We have a chance right now to really capitalise on this.

Our public health agency [Public Health Agency of Canada] – which is a regulating body here – has been very proactive. Last year, it organised the first Canada-wide DIY bio symposium and brought biohackers into Ottawa to engage with academics and industry. It really just opened the lines of communication and was very forward thinking. They and other branches of government recognised that this stuff was going on and there could be some impactful innovation coming out of these places. Its attitude was that it just wants to help that happen in a way that is safe for everybody. 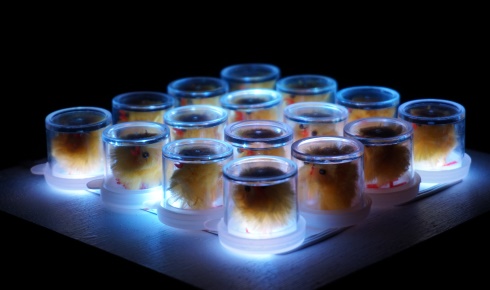 Your lab has an artist in residence, the contemporary bioartist Elaine Whittaker. What is the relationship between art and science in your lab?

It's collaborative. What I'm always looking for is that next new idea. I find we come up with better questions if I have a weird mix of people – if it's always the same types talking to each other about the same papers, then we're not going to come up with new ideas.

The current artist in residence has been growing cells on leaves and we actually couldn't do that in the early days – she figured it out, not us. She's not the first artist to do that. We have another artist we worked with whose work was so robust that she's actually writing a paper with one of my PhD students right now. There's not much difference between an artist and an undergraduate who has never touched a pipette, and these days a lot of bioartists have way more experience than many science students.