Breach of the Peace

Arctic marine mammals evolved in one of the world's quietest oceanic environments. Dr Lauren McWhinnie and Dr William Halliday report on how increasing shipping noise in the region is affecting the way they communicate and forage

Perhaps nowhere else in the world are the effects of climate change more apparent than in the Arctic, where warming weather conditions are already resulting in significant changes to the extent and thickness of sea ice.

Arctic cetaceans are a particular conservation concern for many reasons, including their importance to local communities as a subsistence food source, for the culture and economy, and for their role within arctic ecosystems.

The acoustic integrity of marine mammals' habitat is vital to their survival, as they use sound for a variety of crucial life functions. Unlike terrestrial animals, aquatic animals rely far less on visual stimuli and more on auditory stimuli. Odontocete whales – for example, beluga (Delphinapterus leucas) and narwhal (Monodon monoceros) – produce high-frequency sounds for echolocation, which helps both with navigation and foraging, and high- to mid-frequency calls and whistles for communication.

Mysticete, such as bowheads (Balaena mysticetus) more commonly produce vocalisations that are lower in frequency than odontocete calls, but have a far greater amplitude. Although a great deal less is known about acoustic use in these larger animals, it is thought that much of their vocal repertoire is related to communication.

Until very recently, extensive sea ice coverage has meant the Arctic has essentially functioned as an acoustic refuge from industrial noise. In addition, Arctic waters are generally quieter than those in temperate regions because the presence of sea ice dampens the impact of other noises, such as the crashing of waves. Arctic marine mammals have therefore, up until this point, largely evolved and thrived in one of the quietest oceanic environments.

However, recent sea ice conditions in the region are now making it more accessible to both commercial shipping and industrial activities over a longer period of time each year. One of the primary concerns is that an increase in low-frequency and chronic noise – the type emitted from vessels – may have wide-ranging masking effects (for instance, loud noises from ships can stop individuals from hearing communication calls from others or returning echolocation clicks) on marine mammals and particularly cetacean vocalisations. 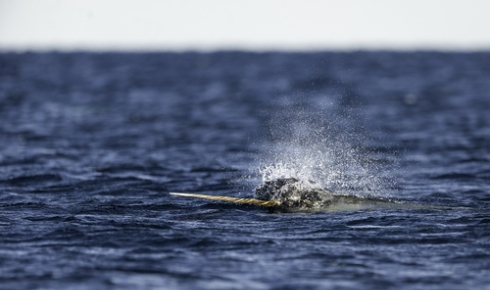 Masking effects may range from being quite subtle to entirely drowning out the calls of marine mammals in the immediate vicinity. The response of many populations to such effects has been shown to be just as wide ranging. Some species have been documented changing the frequency of their calls[1] and others have been recorded increasing both the duration of their calls and the amplitude of their vocalisations in order to be heard[2].

Even more worryingly, some species appear to simply stop vocalising altogether until the introduced noise has ceased[3] which, of course, can potentially have significant consequences for an animal's fitness. Some effects from vessel noise on cetaceans are more visible than masking. For example, the process of icebreaking has a significant acoustic footprint and belugas have been documented on more than one occasion 'fleeing' from an area where icebreaking vessels are in operation.

Evidence gathered from all the world's oceans has led many studies to speculate that the increase in anthropogenic noise to the Arctic soundscape will inevitably result in masking and disturbance effects here. Some have gone as far as suggesting that it could actually result in anthropogenic noise being one of the greatest long-term threats to species living within this polar region[4].

The number of vessels travelling in Arctic waters is already increasing (see 'Rising Traffic', below). The bulk of vessel traffic growth occurs during the ice-free months, which coincides with the migration of several cetacean species. For example, every year, tens of thousands of beluga and bowhead whales migrate from the Bering Sea to the Beaufort Sea in the spring, and then migrate back to the Bering Sea in the autumn. The migration route of these whales generally follows the mainland coastline along Alaska and northern Canada, which is also where higher levels of vessel traffic occur. There is therefore already a significant spatial and temporal overlap between vessel traffic and cetaceans in this part of the Arctic, and so as vessel traffic increases, so does the likelihood of cetaceans experiencing an acoustic impact from this activity.

In anticipation of this rise in vessel activity, the International Maritime Organization introduced and adopted the Polar Code in January 2017. The Polar Code states that when planning a voyage, all mariners must familiarise themselves with current information on marine mammals and measures that should be taken if they encounter them. This includes information related to known areas with high concentrations of marine mammals such as nursery and feeding grounds, as well as seasonal migration corridors. Vessels should also adhere to routeing systems and speed restrictions. However, much of the information on where Arctic marine mammals occur in high concentrations is not readily available.

There is now a global acknowledgement that, as well as being a stressor to individual animals, noise from vessels can act at an ecosystem level, through its disruption of important processes such as predator–prey interactions[5]. As such, it makes sense that we should now be considering the addition of marine noise to the suite of threats we attempt to mitigate through spatial management frameworks and tools such as Marine Protected Areas (MPAs). However, despite the growing number of MPAs, there are still very few examples of MPAs with implemented management schemes that aim to tackle and address the issues related to vessel noise.

Coincidently, traditional marine mammal conservation initiatives are underpinned by spatially defined regions, be they permanent or semi-permanent in nature. This makes the implicit assumption that the target species will continue to aggregate within their known ranges, which may be an inaccurate assumption for marine mammals that rely on sea ice as a habitat feature. Another potential 'spanner in the works' could be that any increases in underwater noise from vessel traffic may result in animals changing their migration patterns or becoming less predictable in their regional residency, and even total abandonment of important sites. These are important factors in the Arctic, as they could reduce the success rate of local hunters or result in them having to travel further in order to harvest their prey.

Fortunately, MPAs are not the only tool in our arsenal. Other spatial measures that could be used to protect marine mammals from vessel noise include vessel speed restrictions, movement of shipping lanes, designation of avoidance areas and quiet corridors to name but a few.

The problem with implementing any of these management mechanisms within the Arctic is that the extreme nature of this environment will introduce factors that will make the application of many tools either unfeasible or financially unviable. For example, ice cover may negate route changes for safety reasons, or remote access may be limited and require pilots to be on board for the duration of a journey, therefore increasing cost. Policing or monitoring compliance with such measures is likely to prove more challenging in such remote areas and will probably be dependent on local communities and the installation of remote instrumentation such as hydrophones.

One thing is for sure: there is an immediate need to start addressing the associated impacts of noise from increasing vessel traffic in the Arctic. At least for now there is still a relatively short summer 'ice free' season and an opportunity for pre-emptive and precautionary management measures to be put in place, an opportunity that we no longer have in more southerly latitudes. Several studies have already speculated that it may be easier to maintain and preserve a quiet location rather than reduce the noise in an area that is already acoustically compromised. Therefore, we should perhaps view the Arctic as a chance to get things right when it comes to anthropogenic noise and proactively tackle what is arguably the lowest hanging fruit in relation to impacts of climate change on Arctic marine mammals. 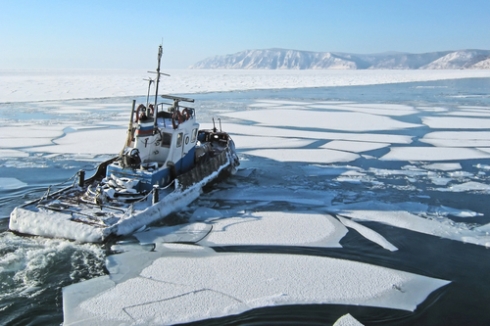 Rising Traffic
The number of vessels travelling in Arctic waters is increasing, and includes vessels that are transiting through areas with significant spatial constraints, such as the Northwest Passage in the Canadian Arctic and the Northern Sea Route in the Russian Arctic. Many of these vessels are servicing oil and gas exploration areas and mining operations, but there are also a growing number of freighters, cruise ships, military vessels and research boats that are all becoming far more common across the entire Arctic region.
Records are constantly being set for ships travelling in the Arctic, especially in the Northwest Passage. For example, the first bulk carrier crossed the Northwest Passage in 2013, followed by the first cruise ship in 2016. In summer 2017, a Finnish icebreaker set the record for earliest transit through the Northwest Passage, completing its voyage on 29th July. All of these records are being facilitated by a longer ice-free season accompanied by a greater ice-free extent.
Furthermore, these trends are predicted to continue into the future, with several models and studies forecasting that the Arctic will be fully ice-free throughout the summer by as early as 2050.

Dr Lauren McWhinnie is a MEOPAR postdoctoral fellow at the University of Victoria, where she maps marine acoustics and noise from shipping traffic and its impacts, and looks at ways of minimising noise pollution.

Dr William Halliday is an associate conservation scientist with Wildlife Conservation Society Canada based at the University of Victoria. His research focuses on the Arctic underwater acoustic environment, and how it is affected by climate change and shipping.