Before the invention of synthetic dyes in the late 19th century, people relied heavily on plants to add colour to their world. Barbara Rush reports from a small corner of France dedicated to conserving these fascinating plants

In the tiny French hilltop village of Lauris in the Vaucluse, Provence, is a remarkable garden, the 'Jardin Conservatoire des Plantes Tinctoriales' (Conservatory Garden for Dye Plants).

It is not the usual botanical garden, full of gorgeous blooms and exotic plants. At a glance, it is not even particularly colourful, as its name might suggest. The pigment molecules used to make dyes from plants are often hidden in the stems, leaves and roots, rather than the flowers.

The garden occupies two terraces of the Château de Lauris and houses a collection of some 250 species of dye plant. It was created by Michel Garcia, a world authority on natural dyes, and is managed by the association Couleur Garance.

Before the introduction of synthetic pigments at the end of the 19th century plants were the only source of dyes, and the garden aims to conserve these historically useful species.

Natural dyes made fortunes for the dyers of the Vaucluse until the introduction of synthetic pigments, which contributed to the decline in natural dyeing. In the 17th century, Jean-Baptiste Colbert, a minister in Louis XIV's government, passed laws specifying the plants that could be used for dyeing, ensuring quality and reducing competition. This led to the classification of 'grand teint' or 'petit teint' (fast or non-fast dyes), the measure of a colour's resistance to fading or running.

The wealth of Lauris was largely based on dyeing with madder (Rubia tinctorum), known as 'garance' in French (hence the association's name, Couleur Garance). Madder belongs to the Rubiaceae – a large family of plants that produce red dyes – many of which are represented in the garden.

The agronomist Jean Althen imported madder into France from Armenia. The highly sought-after red dye was a symbol of wealth and opulence, and the trousers of French soldiers up until the First World War were dyed red with madder.

Madder is a real factory of colourants: 15 of the 28 different types of anthraquinone produced by the plant create various shades of red, the main one being a pigment known as alizarin. To extract the dye the roots are harvested, usually after several years, before being dried, beaten and cut into lengths of about 10cm, which are then ground. Mills from the 17th century still exist in the area. 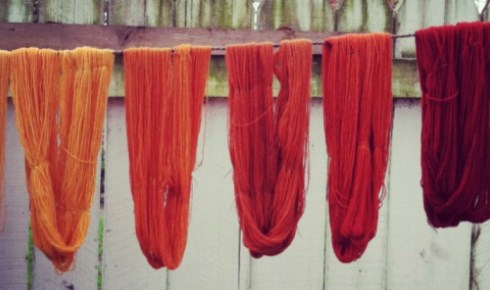 The powdered dye could be stored for several years. In fact, the dye was said to improve when kept in barrels due to a process of fermentation and hydrolysis. The dye is used by preparing an infusion or decoction of the dried plant material by simmering it in water, followed by filtration. The resulting solution is used as the dye bath.

In 1868, alizarin became the first natural dye to be synthesised. Two German scientists, Graebe and Liebermann, synthesised it at almost the same time as Englishman W H Perkin but by a different process. Production of the synthetic product was cheaper than making the natural dye.
Nowadays, rather than being a source of great wealth, the perennial scrambling herb madder is considered an undesirable opportunist. 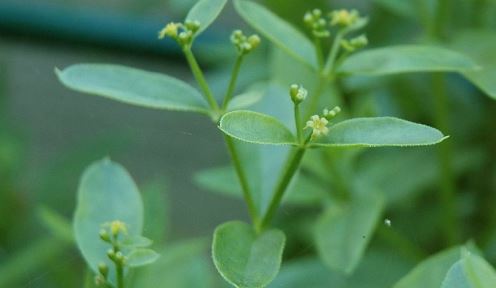 The Vaucluse was also famous for yellow dyes – dyer's rocket or mignonette (Reseda luteola) being the reference on the colour index. A flavone, luteolin, occurs throughout the plant and extraction involves preparing an infusion or decoction of the fresh or dried aerial parts of the plant. Following filtration, the resulting solution dyes fabrics a vibrant yellow.

Other sources of yellow dye include the berries of buckthorn, Rhamnus sp. (called 'les graines d'Avignon') used for illuminating manuscripts, the European smoke tree (Cotinus coggygria) and the bark of the black oak (Quercus velutina). 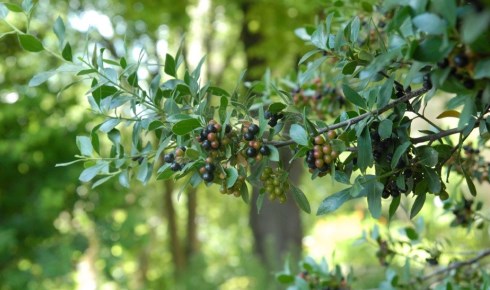 Dyeing with indigo is nothing short of extraordinary.

Most people are familiar with indigo (from indicum, 'le bleu des Indes'), the now ubiquitous blue dye used in jeans. The heavy-duty cloth that became known as denim was woven in Nimes, but dyed in Genes or Genoa using indigo, and Genes became 'jeans' in English.

The European source of the pigment indigo is the leaves of woad (French 'pastel', Isatis tinctoria). In the 16th and 17th centuries a cheaper source of indigo from the tropical species Indigofera became available, thanks to the voyages of Christopher Columbus and Vasco de Gama.

Blue was the symbol of the French royal family and, although rare, indigo was the queen of dyes up until the end of the 19th century. In the 1890s, thanks to the work of German chemist Adolf von Bayer, a commercially feasible method for synthesising indigo dye was created, enabling the world to dress in blue.

There is a certain magic surrounding indigo, as it is different from all other dyes and the results are spectacular. It does not exist as such in the plant in the form of anthraquinones or flavonoids, but occurs as precursors in the form of colourless heterosides of indoxyl.

Whatever the precursor, all indigo-producing plants give indoxyl, which in turn gives indigo.

Whereas the red and yellow dyes are used as infusions or decoctions, and the fabric requires a mordant to ensure fastness of colour, indigo (or indigotine to give it its correct name) needs no mordant, but does require some fairly sophisticated chemistry involving redox reactions.

First the leaves of an appropriate plant – for example, woad – are harvested and water is added together with calcium hydroxide to give an alkaline pH. Enzymes enable the hydrolysis of the precursors to give colourless indoxyl. Two molecules of indoxyl undergo oxidation in the presence of oxygen in the air to give indigo, a blue pigment that is insoluble in water. 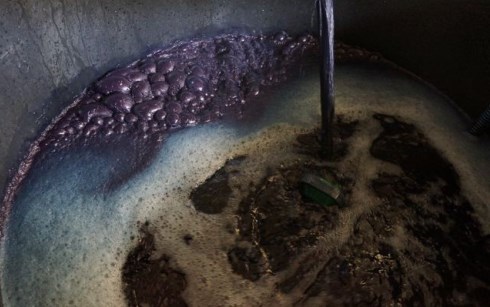 It is not possible to dye with an insoluble pigment, so the indigotine has to be reduced to give soluble white indigo or leuco-indigo. This is achieved by adding a reducing agent (antioxidant) to the dye vat, such as glucose, henna (which is also a dye) or even urine. The dye vat is ready when the liquid appears as a dirty greenish yellow with a metallic shine on the surface.

The fabric to be coloured is dipped into the dye bath, which does not have to be boiled like most dyes. On removal from the dye vat the fabric is greenish yellow but, as if by magic, the colour changes to a beautiful blue as the oxygen in the air oxidises the leuco-indigo to indigo.
Deeper shades of blue are obtained by successive passages in the dye vat.

The Toulouse area became the centre of the indigo dyeing industry in France. The fermenting leaves containing indigo were compressed into balls ('coques') which were sold for use by dyers.

It is unclear what function indigo precursors perform in the plant, but they are found in a diverse selection of plant families and occur worldwide. The resulting molecule, indigotine, is the same regardless of its origin.

What is extraordinary is that dyeing with indigo, although complicated, was discovered independently by many civilisations using only indigenous plants.

Why do plants make pigments?

The molecules involved in dyeing are secondary metabolites, which serve important and highly specialised functions in the plants' adaptation to their environment. The anthocyanins largely responsible for the colours of petals are an aid to pollination. As dyes they are not stable, being affected by changes in pH, but they are useful as food colourings, as are the carotenoids.
Anthraquinones in roots of plants such as madder are natural pesticides that have a nematocidal action.

The colourants present in the roots of some plants such as the docks and sorrels (Rumex) enable the plant to grow in soils contaminated by heavy metals. For the same reasons that metal-based mordants attract colour molecules (see 'Tannins and mordants', opposite), the pigment chemicals chelate the metal ions present in the soil, protecting the rest of the plant and improving the soil for other species.

Flavonoids, particularly the flavones, help protect plants from ultraviolet radiation. Thus, the luteoline present in dyer's rocket or mignonette has a primary function of protection against harmful radiation. Gingko biloba is thought to have survived the 1945 attack on Hiroshima, thanks to molecules that provided protection from ionising radiation.

Tannins and other polyphenols are known for their antimicrobial, antifungal and antiviral properties, which protect plants from a variety of diseases and are used in the tanning of leather.
There is renewed interest in natural dyes because of their special properties, and natural dyes for the food industry are replacing synthetic colourants, which can cause allergic reactions. Plant pigments are even being used in solar panels to replace expensive semi-conductors. Observe nature and she will provide the answers.

Today, a walk through the Jardin Conservatoire des Plantes Tinctoriales introduces the visitor to the plants, dyeing techniques, history, ethno-botanical links and new lines of research aimed at reviving interest in natural dyes. It is a resource for courses in dyeing at all levels – adults and children alike – and aims to promote natural, environmentally friendly, non-polluting techniques.

Cultures throughout the world have made use of their endemic dye-plants to colour their world. North American Indians of the Osages tribe used parts of the Maclura pomifera tree to paint their faces orange. In China, the flowers of the pagoda tree (Sophora japonica) were used to dye silk yellow for the clothes of high-ranking people. Tribal chiefs of Africa wore costumes dyed with indigo. Whether it be Africa, Asia, Europe or America, one can find plants that produce indigo, red or yellow pigments and tannins. The Conservatory Garden in Lauris has a large collection of these.

Although plants produce molecules giving a wide range of colours, the three primary colours – red yellow and blue – can be used to create almost any shade, especially when combined with the blacks and browns of tannins or polyphenols, also produced by plants. The famous Lincoln green is a combination of woad and dyer's rocket.

Natural plant dyes are normally soluble in water and can be used to dye protein fibres such as silk or wool, as well as cellulose fibres such as cotton, linen, hemp etc. Before dyeing, however, the fabric has to be treated with a mordant, which enables the dye to attach to the fibres.

The salts of metals are often used to combine with the colourant molecules. Potassium aluminium sulphate, or alum, is the most frequently used mordant, combined with cream of tartar. Iron sulphate is also a common mordant, but changes the resultant colour.

When dyeing fibres composed of cellulose, an additional treatment with tannin may be needed, as they are more difficult to colour than protein fibres.

Dr Barbara Rush CBiol MRSB is a retired biologist living just 3km from the gardens, in Provence. She is a member of the executive board of Couleur Garance.