Can we fix it?

For more than 40 years, scientists have attempted to engineer cereal crops that can fix atmospheric nitrogen. With more mouths to feed than ever, a breakthrough may finally be within reach, writes Jack Parsons

The first 'Green Revolution' of the 1960s saw a shift towards the use of high-yielding crop varieties, pesticides, herbicides and fertilisers to increase global food production. So important were these developments that they are credited with saving a billion people from starvation and earned their chief architect, Norman Borlaug, the 1970 Nobel Peace Prize.

Chemical fertilisers, especially nitrogen-containing ones, have been particularly important as drivers of crop growth. Nitrogen fertilisers are generated via the Haber-Bosch reaction, a process requiring temperatures of 300°C and pressures equivalent to those found 2km under the sea to break the triple bond of atmospheric nitrogen and 'fix' it into ammonia.

These products are associated with multiple problems. The energy required to fix nitrogen for fertilisers accounts for roughly 1.5% of global fossil fuel use per year, and nitrous oxide, a greenhouse gas 300 times more powerful than CO2, is released as a waste product during fertiliser use.

In industrialised nations, where they are often heavily applied to crops, fertilisers leach into water systems, causing excessive plant growth and the death of animal life. In developing nations, they can be prohibitively expensive.

Of course, a solution to the need for fixed nitrogen has evolved in a subset of crops known as the legumes. In an extraordinary example of inter-kingdom cooperation, symbiosis between the legume (such as alfalfa and soy) and the Rhizobia soil bacteria provides a supply of 'fixed' atmospheric nitrogen to the plant, largely freeing them from the need for man-made fertilisers. This saves the high financial cost and environmental degradation associated with fertiliser use and means legumes can grow in less fertile soil conditions.

Following a two-way molecular conversation beneath the soil surface, Rhizobia form infection threads – with the help of the plant – and penetrate deep into the root tissues. The bacteria's remarkable enzyme, nitrogenase, reduces atmospheric nitrogen (N2) to ammonia (NH3). In return for the fixed nitrogen, the legume provides a sophisticated nodule root structure in which the bacteria reside and receive carbon sources for energy.

However, the most important crops for human consumption – cereals such as rice, wheat and maize – do not have this ability. The global population continues to boom – from 2.5 billion in 1950 to 7.5 billion today, and possibly 9 billion or more by 2050. With ever more mouths to feed, fertiliser useage could continue to increase, contributing to climate degredation.

The transfer of nitrogen-fixing abilities to cereals was set as a challenge at the influential Asilomar Conference on recombinant DNA in 1975. Despite remarkable progress in other areas of genetic technology, this has not been achieved more than 40 years later.

Full symbiosis engineering would require plants to selectively recognise the right bacteria, themselves engineered to target cereals, before undergoing a suite of morphological changes to generate root nodules and permit nitrogen fixation.

Inserting nitrogenase into plants necessitates isolation from photosynthetic processes, as it is irreversibly 'poisoned' on exposure to oxygen. This likely means plastid or mitochondrial engineering, but the goal of finding a suitable plant environment for nitrogenase is elusive.

These challenges have led experts in the field to brand these approaches unlikely to yield "genuine solutions for ... perhaps as long as 20 years"[1].

However, thanks to recent advances in our technological capabilities and understanding of nitrogen-fixing symbioses, there is a third option. The idea of 'synthetic symbioses' is a relatively simple one: re-engineer pre-existing associations between cereal crops and endophytes, the soil bacteria that naturally colonise plant tissues.

By providing endophytes with the ability to fix nitrogen, a ready-made cereal relationship could be turned into a synthetic nitrogen-fixing symbiosis. In 2013, an Argentinian group did just that, transferring nitrogen-fixing abilities to Pseudomonas protegens and using them to inoculate maize and alfalfa with impressive growth promotion results[2].

However, there is a flaw in this strategy. Nitrogen fixation is costly in terms of energy. If bacterial endophytes are using masses of energy to power nitrogenase, they are likely to become uncompetitive in the soil-plant environment. This means any benefits delivered to plants would be extremely short-lived as the engineered bacteria are gradually replaced by strains not encumbered by nitrogen fixation.

However, work on a promising potential solution is now reaching maturity. It has been known for many years that the plant pathogen Agrobacterium tumefaciens is able to 'bias' the region of soil directly influenced by a plant's roots (which is known as the rhizosphere) to enhance its own growth.

It does this by transferring genes to its target plant for the biosynthesis of chemicals called opines. The plant becomes, in effect, an opine factory. As A. tumefaciens is one of the only species able to utilise opine as both a nitrogen and carbon source in the soil, it creates a nutrient supply from which only it can benefit. 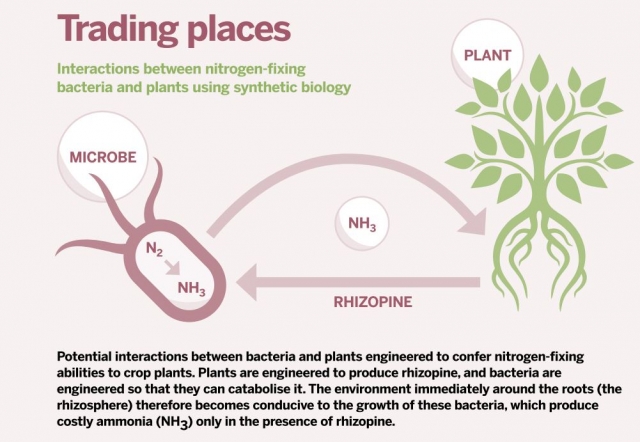 This phenomenon of rhizosphere biasing is not restricted to Agrobacterium. Some Rhizobium strains can synthesise rhizopines while fixing nitrogen in legume nodules. By releasing these compounds, which they alone can catabolise, they may give members of their own species a competitive edge in the busy bacterial world of the rhizosphere.

Ongoing work on rhizopine biosynthesis and catabolism suggests transgenic plants expressing rhizopine might be developed, and bacterial 'biosensors' of rhizopine could be used to demonstrate it is being secreted from plant roots. By placing rhizopine biosynthesis genes in cereal crops, and giving endophytes the ability to catabolise them, a biased rhizosphere could be generated in which the endophytes are selected for, among the enormous pool of soil bacteria, and thrive in the vicinity of the plant roots.

However, the problem remains that nitrogen fixation is a costly business. If engineered endophytes are too quickly outcompeted when introduced to the soil, will they be of any use at all?

The answer here is to place aspects of the bacterial genome under 'rhizopine control'. In other words, ensure nitrogenase is only expressed in the presence of rhizopine. This creates a synthetic 'toggle switch', meaning nitrogen fixation only occurs in the immediate vicinity of the transgenic plants.

As well as ensuring that engineered microbes remain competitive and deliver as much nitrogen as possible to the plant, this system could also be used to generate a 'kill switch'. If the bacteria were made rhizopine auxotrophs (that is, they only survive in the presence of rhizopine), escape of these modified organisms away from the immediate plant root zone would be prevented. Such control mechanisms are of particular importance in minimising impacts on surrounding ecosystems and could help answer concerns about such technology in GM-sceptic communities.

The ability to generate self-fertilising cereal crops has remained elusive for decades. However, with advances in our understanding of nitrogen-fixing symbioses, as well as technologies such as Golden Gate assembly and more affordable DNA sequencing and synthesis, we have now reached a crucial tipping point. Using the synthetic symbiosis approach, there is a real opportunity to generate self-fertilising plants in the extremely near future.

Even if this solution is not as efficient as legume symbioses, small percentage increases in the nitrogen available to plants could reduce fertiliser usage in developed nations and provide yield boosts so desperately needed in some developing countries. This technology has the power to be so revolutionary because, quite simply, it could increase yields from thin air.

Jack Parsons AMRSB is a BBSRC DPhil student at the University of Oxford. His research focuses on characterising early stage rhizobium-legume symbiosis, and developing novel platforms for tracking root-microbe interactions.