Transfusions of umbilical cord blood can provide a life-saving boost to leukaemia patients’ immune systems. So why is banking cord blood the exception rather than the norm, asks Bryn Nelson

In 1988, French doctor Eliane Gluckman saved a five-year-old boy from North Carolina by treating him with what was then deemed medical waste. The boy had been diagnosed with Fanconi anaemia, a rare genetic disorder that wipes out the bone marrow's ability to form new blood cells. At the Hôpital Saint-Louis in Paris, Gluckman used blood from the umbilical cord of the boy's younger sister for an experimental transplant. It worked.

Collecting umbilical cord blood doesn't require an invasive collection procedure. "One of the advantages of a cord blood graft is it's the only circumstance where you collect cells without touching the donor," says Mary Laughlin, medical director of the Cleveland Cord Blood Center, Ohio. "When parents are celebrating a new life and asked about giving up cells that would otherwise go into the trash, that's a different donation," she says.

In 1995, Laughlin and colleagues performed the world's first cord blood transplant on an adult, a woman in her early 20s who had been diagnosed with acute myeloid leukaemia.

In healthy people, bone marrow produces cells called 'blasts', which mature into infection-fighting white blood cells. Leukaemia sends production into overdrive, filling the blood with blasts that don't develop as they should. This army of immature cells crowds out the useful ones, leaving the host highly vulnerable to internal bleeding or infection.

This out-of-control growth provides an opening for drug and radiation therapies that selectively cull the body's fastest-growing cells. However, some forms of leukaemia, like acute myeloid leukaemia, don't respond to these therapies well. As a last resort, doctors may deliberately kill off all leukaemia-riddled blood and bone marrow cells, and attempt a full reset with someone else's blood-forming stem cells.

For bone marrow and other transplanted tissue, the chance of finding a match beyond immediate relatives can fall sharply among people with more genetically diverse ancestries. It was the failure to find a bone marrow donor matching the patient's uncommon antigens (human leukocyte antigens, or HLAs) that prompted Laughlin and colleagues to try a transfusion of cord blood.

They correctly predicted it might work, thanks in part to a quirk of newborns' immune systems called neonatal immune tolerance. In telling 'self' from 'other', cord blood cells are far more forgiving than adult bone marrow cells.

The idea to use cord blood significantly expanded patients' options. However, one of the biggest limitations was volume: doctors can extract roughly 10 times more blood-forming stem cells and precursor cells from one bone marrow donation than from a detached umbilical cord.

Studies began suggesting that a cord blood transplant may be insufficient to rebuild the bone marrow in an adult, or take longer for it to become functional, leaving the recipient dangerously exposed to opportunistic infections or bleeding in the interim.

Some researchers reasoned that they could boost the transplant volume by giving adults two cord blood units instead of one. In 2000, researchers[1] at the University of Minnesota performed the first double transplant using cells from two infant donors.

The tactic dramatically reduced the rate of graft failure, in which the recipient's body rejects the new cells. But it barely changed the time needed to regenerate the bone marrow, and some critics questioned whether a double cord blood transplant offered any significant benefits.

To their surprise, researchers also discovered that the donor cells in a double cord blood transplant seem to battle for dominance, a curious 'graft-versus-graft' phenomenon that almost always results in the victor dominating the recipient's new bone marrow and blood cells.

Based on collaborations and discussions with other experts in the field, Delaney pioneered a method to minimise the risk of infection and bleeding after a cord blood transplant by reducing the time needed for the new blood cells to kick in.

The strategy relies on what she and Milano call an 'expanded' blood unit. Starting with an extra batch of cord blood, they separate out the minuscule fraction of blood-forming stem cells and their early descendants, and expand that population in the laboratory. The hundreds of millions – even billions – of resulting stem and progenitor cells can jump-start the generation of protective blood cells in the recipient. When infused along with a more traditional transplant, they can act like a temporary bridge until the replacement bone marrow takes over.

One crucial component, Delaney discovered, is a protein called Notch ligand. When added to the blood-forming stem cells, it lets them divide quickly in the laboratory, but temporarily pauses their development by preventing them from maturing into the normal range of cell types. Critically, they never give rise to T or B immune cells, which would seek out and destroy any perceived threats lacking the right antigens. Putting a donor's T cells into an unmatched recipient, Delaney says, would trigger fatal graft-versus-host disease. "That's the key: we get rid of all those bad parts of the immune system that need to be matched or they can kill you."

With no cells checking the identity of surrounding cells initially, the early flood of blood-forming stem cells need not be matched to the recipient at all, meaning that the expanded cord blood unit could be created well ahead of time and used whenever needed as a universal donor. 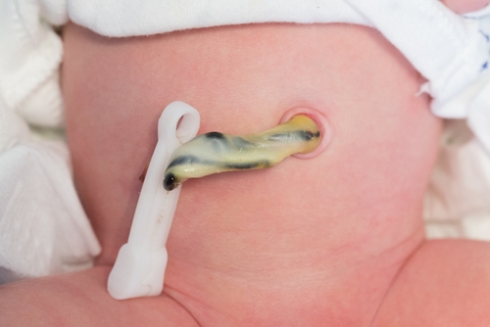 The case of Chris Lihosit

Diagnosed with acute myeloid leukaemia in his early 40s, Chris Lihosit has nicknamed his umbilical cord blood donors Amelia and Olivia based on their blood types, A-negative and O-positive. He is one of an estimated 40,000 people to have received cord blood transfusions globally.

Four hours after the initial infusions, he received his protective bridge of blood-forming stem cells, collected and expanded from the cord blood of a third baby, a boy he and his husband have nicknamed Eddie.

Preliminary results suggested that Delaney and Milano's strategy of adding temporary bridges like Eddie's to cord blood transplants could significantly shorten the time needed to reboot the recipient's population of neutrophils, the microbe-digesting white blood cells that Lihosit was lacking.

Based on their early success, the researchers have launched a larger randomised trial of 160 patients. Eighty are receiving one or two units of intact cord blood. The other 80, including Lihosit, are also receiving the experimental expansion unit of blood-forming stem cells.

The researchers believe, in Lihosit's case, Eddie's cells provided the critical early support for his bone marrow until Amelia or Olivia's cells could take over.

Even before the new strategy, a review of double cord blood transplants by Wagner and colleagues suggested that recipients carried a significantly lower risk of relapse than people who received bone marrow transplants. The benefit seemed particularly apparent for people whose leukaemic cells hadn't been completely eradicated by chemotherapy and radiation.

Delaney, Milano, Wagner and others have raised a question that was previously anathema among doctors: what if cord blood's unexpected cancer-killing prowess is actually linked to there being a partial mismatch between donor and recipient?

Milano explains the rationale: "Something that's different will fight," he says. It's also why an identical twin is a poor donor choice: if the replacement bone marrow is too similar to the flawed original, Delaney says, it will do nothing new to prevent the cancer from returning.

For high-risk patients, in fact, several transplant centres now advocate the opposite of the once-intuitive strategy: using deliberately mismatched cord blood to minimise the risk of recurrence.
Although the clinical trial likely won't be completed and analysed for another year or two, Milano says Lihosit has done exceptionally well, even among those given expanded cord blood units.

Transplant recipients face a daunting few weeks without functional bone marrow when nearly anything can kill them. They pass the first big post-transplant milestone – engraftment – when their new blood precursor cells begin growing rapidly and developing into the proper components within their bone marrow. Daily blood tests can chart the progress of the new recruits: white blood cells such as neutrophils recover first, followed by red blood cells and platelets.

Less than three weeks after the transplant, Lihosit's neutrophils had fully engrafted and genetic tests suggested that Amelia had decisively won the fight to form his new blood and bone marrow. This is Lihosit's new normal, at least for now: his blood type was previously A-positive, now it's A-negative – Amelia's blood. With her blood and immune cells, he's technically a chimera.

Cord blood transplants can ramp up the incidence of acute graft-versus-host disease, in which the incoming cells attack their new neighbours. Lihosit has had to fend off occasional assaults on his own cells, including a lacy rash that covered his back and shoulders. But compared with bone marrow transplants, though, chronic graft-versus-host disease may stop occurring sooner after cord blood transplants; a few cord blood recipients have been able to discontinue all immune-suppressing drugs after only a year.

So far, Amelia's cord blood hasn't brought other unwanted genetic baggage, although a few other transplant recipients have actually acquired new genetic conditions, raising the ethical question of whether doctors should inform the donor's parents of such findings as well.

At first, Lihosit couldn't walk 100 feet down the apartment hallway without leaning on his brother. Until he hit the 100-day milestone after his transplant, the end of the most vulnerable period for recipients, he returned to the Seattle Cancer Care Alliance every other day for blood tests and checkups. At home, every surface had to be disinfected daily with a bleach solution.

For Lihosit, he has survived, but life has fundamentally changed. He has had to battle through an existential crisis when he realised that an essential part of him – his lifeblood – was gone for ever.

What the future holds

Despite the success stories from cord blood transplants, cord blood is still mainly thrown away. However, this could all change, with Nohla Therapeutics (see 'Why do we bin it', below) aiming to create a universal blood precursor product that health agencies could theoretically stockpile.

Blood cord transfusions have also attracted the interest of US research departments with a different intention: those looking for medical interventions that could treat acute radiation syndrome after a dirty bomb or nuclear disaster. Nuclear radiation can wreak havoc on healthy marrow and, just as 'Eddie' provided the initial defences until Amelia could take over, a timely dose of blood-forming stem cells could offer a critical window of protection for people exposed to radiation until their own bone marrow recovers.Perhaps this unlikely interest could kickstart the drive needed to make the option of cord blood donations a more fundamental part of maternity care.

Why do we bin it?
Despite dozens of studies documenting its curative powers, cord blood is saved after only 5% of all US births. The rest is simply thrown away. As few as one in 10 donations pass the screening tests and have enough volume to merit long-term storage. The NHS's Cord Blood Bank has been operating since 1996 and has more than 10,000 samples, but can only collect samples in the six hospitals where there are dedicated trained staff.
Delaney's new cancer centre spin-off, Nohla Therapeutics, hopes to develop an off-the-shelf blood precursor product that doesn't require any matching of human leukocyte (hence the company name, from 'no HLA'). If it can craft a universal donor out of stem cells from cord blood, public health agencies could theoretically pool and stockpile the units.

This is an edited excerpt from an article by Bryn Nelson originally published by Wellcome on Mosaic. The Wellcome Trust is a global charitable foundation dedicated to improving health. All Mosaic's articles can be reproduced or distributed for free under a Creative Commons licence.