In the wake of the ash dieback crisis, Rick Mumford explains a range of new techniques – from citizen science to 'sniffer' technology at airports – that could protect the UK from imported plant diseases

Our landscape tells us the story of what plant disease is capable of. A walk in the British countryside, which is now largely devoid of elm trees, will quickly remind you that even after 40 years, the legacy of Dutch elm disease is still with us: it killed nearly 50 million trees[1] and demoted one of our iconic tree species to effectively a hedgerow shrub.

So it is understandable that the arrival of ash dieback (Hymenoscyphus fraxineus) in 2012 caused such concern across the UK, eliciting a reaction to a plant disease outbreak that had not been witnessed in a generation, including two meetings of COBR (Cabinet Office Briefing Rooms), the government's emergency response committee.

While the long-term outcome for British ash trees is yet to be determined, ash dieback and Dutch elm disease share similar features: a significant indigenous tree species and an emerging fungal pathogen with a high potential for tree mortality, spread through a partnership of international trade and efficient natural vectoring.

Ultimately, both also demonstrate failures in biosecurity and highlight the vulnerability of our trees and woodlands. While an optimistic prognosis might be emerging from research suggesting that British ash populations might have more natural tolerance to ash dieback than other European populations[2], new threats lie to the east.

Hailing from eastern Asia, the emerald ash borer (Agrilus planipennis) has been spreading westwards, reaching Moscow in 2007 and continuing to spread at around 25 miles per year[3]. Since being first identified in North America in 2002, this pest has destroyed tens of millions of ash trees in the US with a predicted cost of $10.7bn[4].

In all probability, the emerald ash borer will reach Europe in the near future and, based on evidence from the US, it is difficult to see how anything but Herculean efforts would be able to stop it spreading across Europe. Plant pests do not respect national borders.

While the threats to our trees have dominated headlines recently, history shows us that our crops are at risk as well. This year marks the 30th anniversary of the first discovery of rhizomania in the UK. A viral disease of sugar beet, caused by Beet necrotic yellow vein virus, it had been marching across Europe before first appearing in Suffolk in 1987 – an event that sparked a control programme which lasted nearly 15 years. While these efforts never eradicated rhizomania, they did slow down its progress and enabled plant breeders to develop resistant varieties. Ultimately, the disease cost the UK government and industry millions of pounds.

Likewise, a single outbreak of ring rot (Clavibacter michiganensis subsp. sepedonicus) on potato in 2003 cost hundreds of thousands of pounds to eradicate, with 165,000 tubers tested and more than 1,500 tonnes of high-value seed potatoes destroyed or used as animal feed. Some quotes from the time said the cost to growers was £450,000.

The impact of plant disease on our crops and the natural environment is enormous and wide ranging – not simply economic, but ecological and social, too. Therefore, it is imperative that we continue to maintain and enhance our national biosecurity.

The UK's Plant Biosecurity Strategy[5] published in 2014, focused on the concept of the biosecurity continuum, a multi-layered approach of deploying control measures not only at the border, but pre- and post-border, too. As well as monitoring and surveillance systems, we need diagnostic methods to ensure we can identify invasive pests and pathogens accurately and rapidly.

Traditionally, diagnosis relied on experts identifying pests or pathogens based on their morphological characteristics. While these taxonomic skills remain essential and widely used, they are increasingly being supported by DNA-based molecular diagnostics.

One such approach is DNA barcoding, where a specific target gene – for example, the mitochondrial gene cytochrome oxidase I (COI) – is amplified from a specimen, sequenced and then compared to a database of reference sequences from known species[6]. This is now used routinely in plant health[8] and has proved extremely powerful in situations where traditional identification is difficult – for example, with challenging taxonomic groups such as nematodes or for juvenile life-stages of insects.

Likewise, new technology such as next-generation sequencing (NGS) is allowing the rapid identification of pathogens such as viruses in situations where traditional techniques are unreliable[8].

The key strength of NGS is that it enables us to effectively sequence everything within a sample, without any prior knowledge of what possible pathogens may be present. By combining this shotgun approach with highly effective bioinformatics, we can identify putative pathogens in a non-targeted way, which is invaluable when trying to quickly identify the cause of newly emerging disease problems.

This diagnostics revolution is not confined to the laboratory, either. New methods based on DNA amplification technology called loop-mediated isothermal amplification (LAMP) means DNA testing can be reliably performed in the field for the first time. Like the more widely used polymerase chain reaction (PCR), LAMP enables us to amplify nucleic acid sequences from target pest or pathogen species in a way that is both highly specific and sensitive. However, unlike PCR, LAMP is performed at a fixed temperature, so it needs less power than the constant thermal cycling required for PCR. It is also much less prone to contaminating inhibitors that can cause PCR reactions to fail, and hence can work with much cruder samples.

As a result, LAMP is easier to use in the field than its more famous Nobel-Prize-winning cousin. The technology is now being deployed by plant health inspectors from the UK's Animal and Plant Health Agency at Heathrow Airport to help them with their import inspections. It enables them to identify a range of quarantine pests and pathogens in what is effectively real time. Tests take less than 30 minutes, compared with older methods that involved sending samples to a reference laboratory for identification, which would often take days.

Because LAMP is a robust and easy-to-use technology, it could be part of citizen science-type programmes. Indeed, some small-scale trials have already demonstrated that competent, non-expert volunteers can be trained to use LAMP-based diagnostics in the field. This offers enormous potential for how we might provide a greater surveillance effort in the future during disease outbreaks, and how we can build on wider public engagement with plant health and the environment.

While our ability to identify new and emerging pests and pathogens has been aided by new diagnostics and alternative surveillance approaches, many challenges remain – especially when attempting to detect pests and diseases that are either hidden (cryptic) or yet to show visual symptoms (latent).

As a perfect example of this challenge, two serious tree pests – the pinewood nematode (Bursaphelenchus xylophilus) and the wood-boring beetle Monochamus alternatus – were recently identified from imported furniture[10]. The findings were only made following the emergence of live adult beetles, including one found in a member of the public's dining room. The source in this and other cases was a particular type of wooden dining room chair imported directly from China. Subsequent investigations revealed that up to 84,000 chairs of this kind had been brought into the UK in the preceding year. 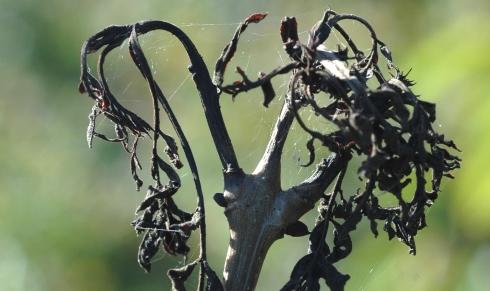 This illustrates the challenge faced by inspectors, not only through the range and volume of goods to be inspected, but also of how to identify infestations when there are no clear visible signs. Research is ongoing to develop better techniques for detecting these types of threats, with one example being work funded under the LWEC Tree Health and Plant Biosecurity Initiative, which is looking specifically at new approaches for the early detection of tree health pests and pathogens[11].

Such lines of action include those for detecting changes in infected plants using 'sniffer' (sometimes known as 'electronic nose') technology to identify volatile organic compounds (VOCs) – chemicals emitted by either the pests or pathogens themselves, or by the diseased host plant. The VOCs are detected using advanced analytical chemistry techniques.

Many plant pests and diseases emit characteristic VOCs, and researchers are working to characterise those from material infected with a range of tree diseases and then to identify the VOC profiles that are unique to each. Using this 'odour fingerprint', portable analysers could be used to detect the presence of a specific disease, even when the symptoms are not visible.

Another novel detection technology is hyperspectral imaging. Research has shown that when plants become infected with a disease or are subjected to other stresses, they undergo biochemical and physiological changes that can be detected before any visible symptoms are observed. Using imaging technology that can detect light outside the human visual spectrum – for example, infrared or ultraviolet – it is possible to identify spectra that are diagnostic of a particular disease.

A hyperspectral imaging camera is currently under development that could either be hand-held or mounted on an unmanned aerial vehicle, or drone. This means that whole forests could potentially be inspected more effectively than by visual inspection from the ground and without the cost of using manned aircraft such as helicopters.

The researchers will also look at developing new traps for capturing insects, and automated DNA-based detection instruments for identifying pathogens in the environment. One approach being investigated in this vein is the use of water sampling to capture and identify Phytophthora species from water. These organisms are members of the oomycetes and include serious pathogens such as potato late blight (P. infestans), as well as tree diseases such as P. ramorum, which is having a significant impact in the UK. (In Wales, it is estimated that a third of all larch has now been felled in an effort to control the spread of the disease[12]).

Using a rapid method for sampling water and combining it with cutting-edge NGS, we can not only identify known Phytophthora pathogens, but also new species that might become a threat to our trees or crops.

In our ongoing battle against plant diseases, the development of early warning systems, using the types of technology and approaches such as those described above, can be an essential part of our biosecurity toolkit. It also demonstrates the key role science, particularly interdisciplinary research, can play in helping us in the fight against invasive pests and pathogens.

Under surveillance
Since the arrival of ash dieback, the UK has been at the forefront of developing a whole range of innovative and informal tree health surveillance networks, including the citizen-science based OPAL Tree Health Survey and the International Plant Sentinel Network. The latter is a global network of botanical gardens and arboreta working together to act as an early warning system to recognise new and emerging pest and pathogen risks. Another initiative is the Observatree project, which uses a network of 200 trained volunteers to help identify new pest and disease threats to UK trees. It has already had significant success, identifying more than 500 cases of tree disease in one year, including a new outbreak of the oriental chestnut gall wasp quarantine pest[9].

Professor Rick Mumford FRSB is director of science at Fera Science Ltd and visiting professor of practice at Newcastle University. A plant virologist by training, much of his career has focused on the development of novel diagnostic methods.