This year marked the 400th anniversary of Shakespeare's death. As 2016 draws to a close, Alison Woollard and Emma Smith look at how the bard's work has inspired the creative – and at times funny – vocabulary of genetics

Geneticists use various systems of nomenclature for the naming of genes, depending on the experimental system they are using. Such systems range from the application of somewhat mundane logic, or acronym, to what seem like flights of complete fancy.

The study of the humble fruit fly (Drosophila melanogaster) attracts the most interesting, complex and seemingly whimsical terminology. The use of names such as 'cheap date' and 'tin man' have been criticised as being silly or even offensive (cheap date mutant flies are intolerant of alcohol; tin man mutants lack a heart).

The problem with these names is that some may have lasting implications – the human homologues of such genes may be associated with human disease. Imagine being told that your 'ken and barbie' mutation (flies lacking external genitalia) means you only have months to live?

However, we shall see in this article that the naming of Drosophila genes also opens a fascinating window into the creativity of biological investigation and, of course, the investigators themselves.

The essence of genetic experimentation is to break the thing to see how it works. The 'thing' – a fly in this case – is 'broken' by the introduction of random mutations into its DNA. Such mutations will be heritable and might disturb some important process.

Large collections (we are talking thousands) of 'mutagenised' flies will be painstakingly inspected in a so-called 'genetic screen', usually down a microscope, before the desired phenotype is encountered. If the investigator is interested in the development of the eye, for example, they will seek blind mutant flies.

The trick, then, is to find out which gene contains the mutation compared with the 'normal' gene and, hey presto, a gene important for eye development or function has been identified.

Whole collections of genes crucial for a particular process can be found in this way and assembled into logical pathways or circuits in order for a whole process to be completely described. There is no limit to the kind of biology that can be studied in this way – development, sex, behaviour, memory, lifespan... from the intricate details of how the nervous system is wired together to the molecular mechanism of programmed cell death.

The most crucial thing about the genetic method, though, is that the process of discovery is itself blind. Mutations are introduced completely randomly by exposing the flies to a mutagen (x-rays, for example). The investigator has no influence over what genes are identified, makes no assumptions and cannot pick and choose. They are led by phenotype alone. This means that choosing mutants with the most informative phenotypes is crucial to success. It is an art form.

Hence, when the elusive mutant is finally found, the geneticist must celebrate their success with a name that properly encapsulates the nature of the defect. In fly genetics, cultural references abound, from cartoons to computer games, from great art to Hollywood. Here, fittingly for the end of the year that marks 400 years since the death of our greatest literary icon, we look at Shakespearean inspiration in gene nomenclature.

Take malvolio, for example. malvolio is the Drosophila homologue of mammalian natural resistance associated macrophage protein (NRAMP), which affects taste behaviour[1]. malvolio mutants don't like sugar, but are unusually keen on salt. To the investigator, they "taste(d) with distempered appetite"[2].

In Shakespeare's comedy Twelfth Night, Malvolio is the puritanical party pooper who disdains the revellers and gets his comeuppance when a trick is played on him to make him think Olivia, the lady of the house, is in love with him. For Shakespeare, Malvolio is a killjoy whose lack of generosity excludes him from the celebrations that mark the festive end of the play.

hamlet, on the other hand, is a simple pun. hamlet mutants are named from Hamlet's 'to be or not to be' soliloquy because the defect affects development of cells descended from 'IIB' progenitor cells.

In hamlet mutants, external sensory (ES) neurons derived from IIB precursors are converted into multidendritic (MD) neurons with rather different properties[3]. This nomenclature wittily short-circuits the most memorable existential conundrum in Western literature, answering Hamlet's own question with 'not IIB'.

In fact, it would be more accurate to describe this phenotype as 'not IIIB' (IIIB is the daughter of IIB, and it is normally the IIIB cell that gives rise to ES, which is transformed into MD in hamlet mutants). Shakespeare fails us for naming this phenotype more precisely, but 'hamlet' seems to do the job pretty well.

capulet is a combination of both the logical and the romantic. The author of the original paper on this gene[4] did not want to change the name from that used for homologues in other species, where it is called Cap (cyclase-associated protein), but was worried about potential confusion with a related gene associated with 'Capping' protein. So he wanted a name that was like Cap but was not Cap. Looking down the microscope, he was struck by the way the mutants died (capulet is an essential gene): when he used a fluorescent marker to highlight cytoskeletal actin, he found that mutant cells died with a bright and tightly localised array of actin filaments at one end.

He thought it both tragic and beautiful, and the name 'capulet' immediately sprang to mind[5]. The Friar in Romeo and Juliet sees the hasty young lovers' doomed affair in chemical terms: "These violent delights have violent ends/ And in their triumph die, like fire and powder,/ Which as they kiss, consume". 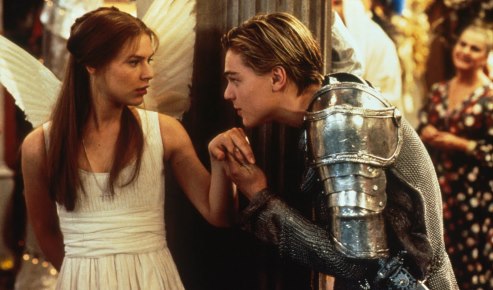 Juliet Capulet, like her husband Romeo Montague, dies, like the fly, in a burst of sacrificial glory: remember the kitsch scene of the candle-lit church at the end of Baz Luhrmann's movie version?

Sometimes genes are named for their interactions with other genes, and this, perhaps unsurprisingly given Shakespeare's penchant for complex relationships, appears to be a particularly fruitful area for Shakespearean connotation. cleopatra mutants, for example, are healthy, except when they are combined with asp (for abnormal mitotic spindle) in cleo-asp double mutants[6].

Both genes regulate cell division, but they work together, such that a defect in either single gene is just about okay. But combining the two defects is problematic, thereby revealing important information about the underlying molecular mechanisms.

The prospero-miranda interaction is a well-characterised paradigm in the regulation of asymmetric cell divisions. Neuroblasts (sensory organ precursor cells) lacking prospero function produce incorrectly specified progeny cells that differentiate into neurons displaying axon pathfinding defects. In other words, the fate of these cells is all muddled up. Mutants with this phenotype were named after the magician in The Tempest who controls the fate of the various characters in the play. This is a brilliant insight into the plot of the play: the shipwrecked noblemen washed up on Prospero's island are completely in his power – he writes their story for them.

One crucial aspect of prospero function is that this gene is asymmetrically expressed, with the corresponding protein being found exclusively in one of two daughter cells following the asymmetric division of neuroblasts. miranda is a gene that is absolutely required for this asymmetric expression of prospero[7]. Biochemically speaking, miranda encodes an adaptor protein that connects Prospero protein to the basal cell membrane during asymmetric division, thus tethering it to one daughter and not the other[8]. miranda is co-expressed with prospero, with asymmetric prospero expression being lost in miranda mutants.

In The Tempest, Miranda is Prospero's daughter and companion in exile. The genetic nomenclature here really homes in on one element of the play. When Prospero describes to Miranda how they came to be banished to the island, he also suggests his dependence on her: "O, a cherubin/ Thou wast that did preserve me". Even though performances often identify Prospero as an over-controlling patriarch, it could also be argued that his "dear-beloved" daughter has been the means of his survival and ultimate redemption.

Finally, caliban encodes a protein that interacts directly with the domain of Prospero protein that enables it to be exported from the nucleus[9] (transcription factors such as Prospero can only function to regulate gene expression if they are in the nucleus of cells, therefore exporting such factors from the nucleus is a good way of ignoring them).

Caliban's role in The Tempest is a disruptive one: he chafes under Prospero's authority and challenges his narrative of control over all the characters. Their relationship is antagonistic, but also intimate: Prospero judges Caliban "a foul beast", but also recognises that "this thing of darkness I acknowledge mine". Although the precise biochemical relationship between Prospero and Caliban has yet to be fully elucidated, 'challenging the narrative of control' is certainly exactly what a nuclear export factor does to a transcription factor, thus the analogy is again well made.

During the Shakespearean period, scholars were just beginning to think about molecular biology – drawing from ancient Epicurian philosophy a new understanding of a world made up, as one scientific contemporary put it, of "invisible atomes of such lytelnesse that they can hardely bee perceaved with the eye". But it is Shakespeare's understanding of character, of interrelated networks, and of the human manifestations of inherited traits, that has given back to genetics a richly creative, and highly appropriate, vocabulary.

It's somehow fitting that a writer whose life overlapped with Galileo's development of the telescope and with Janssen's early microscopic technology should have lent us ways of understanding the "brave new world" of genetic discoveries.

Alison Woollard FRSB is an associate professor of genetics at the Department of Biochemistry at the University of Oxford, where she is also a Fellow of Hertford College, Oxford. She is chair of The Biologist's editorial board.

Emma Smith is professor of Shakespeare studies at the University of Oxford.