A unique collaboration involving scientists, artists and amateur rocket enthusiasts is attempting to sample and identify microorganisms on the edge of space. Rachel Brazil reports

Oliver de Peyer imagines himself one day presenting his work at The Linnean Society in London, the world's oldest active biological society. "To become a Fellow would be the apotheosis of my journey as a scientist," says de Peyer, "and a wonderful throwback to an earlier age where anybody could be a scientist, even if they were an amateur naturalist."

The project he hopes to one day present, like the work of earlier 'gentleman scientists', has been carried out purely for curiosity, with little institutional support. De Peyer is a molecular biologist and laboratory robotics specialist at the Francis Crick Institute, but his passion is astrobiology. Since 2008, he has been part of a team creating a 'high altitude bioprospector' (HAB) to detect microbes in the upper atmosphere.

De Peyer interned at the California NASA lab of astrobiologist Lynn Rothschild in 1999, but with funding hard to find, he moved on. In 2007, he received a £15,000 grant, organised by NESTA, to build and test a HAB that could be flown into the stratosphere using a weather balloon or rocket. The team included Melissa Grant, from Birmingham University School of Dentistry, and Paul Shepherd, an engineer from the University of Bath.

"A number of results have shown extremophile bacteria at high altitude, using samplers deployed from balloons and U2 spy planes, but I am sceptical about these claims,' says de Peyer. He thinks contamination from Earth could explain these results.

"Our approach was to try to detect microbes in situ shortly after sampling using a bespoke device," explains Grant. In other words, samples would be analysed onboard, in a mini-lab flying through the upper reaches of the atmosphere.

"The biology and chemistry needed to be completed at room temperature and would also have to be able to detect any microbe," says Grant, who designed a protocol to amplify any DNA. She went with an off-the shelf DNA amplification system – TwistDx – but designed specialised oligonucleotide probes that could identify bacteria, archebacteria or eukaryotes.

"We strung together a number of different steps, including bubbling air samples through a lysis agent, adding the TwistDx, removing leftover oligos, adding a DNA dye and then reading off the result using a simple fluorimeter that one of Mel's colleagues had designed," says de Peyer.

After a frantic 18 months of building in their spare time, the team finally got an opportunity to test the HAB in the Black Rocks Desert, Nevada. NASA scientists had joined with amateur US rocket enthusiasts to launch several experiments.

But things do not always go to plan in science, whether you are a professional or an amateur. Communications difficulties marred early flights and the final rocket launch ended in a parachute malfunction, causing a disastrous crash at around 380mph, destroying the prototype device.

This might have been the end of the project, but this spring it became the focus of an exhibition entitled Ingenious and Fearless Companions, which premiered at Birmingham Open Media (BOM) gallery. The exhibition chronicles the project, incorporating video-mapped archive films and sculpturally altered relics, such as weather balloons and environmental samples. Elements of the HAB were also part of the 'Digital Weekend' event at the V&A museum in September. 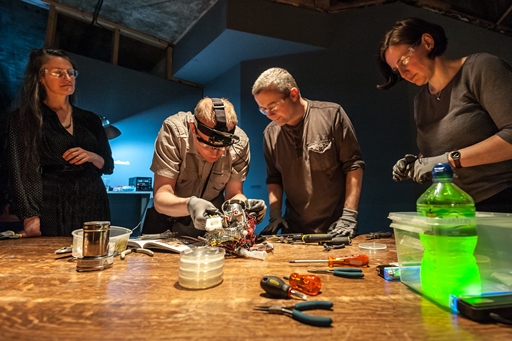 The team during their live 'autopsy' of the HAB project. (Left to right: Kira O'Reilly, artist; Oliver de Peyer, molecular biologist and laboratory robotics specialist at
the Francis Crick Institute; Paul Shepherd, lecturer in digital architectonics at the University of Bath; Melissa Grant, lecturer in biological sciences at Birmingham University School of Dentistry)

The involvement of artists Anna Dumitriu, Kira O'Reilly and Alex May has provided continuing impetus. "We were already an interdisciplinary team, so it felt natural to invite further collaboration from outside of science," says Grant. O'Reilly had been artist in residence at Grant's department in Birmingham and she suggested involving bioartist Dumitriu.

The Ingenious and Fearless Companions exhibition takes its name from an 1869 Victor Hugo quote discussing the future of air navigation. Dumitriu says she suggested the title because she "liked the way it might refer to the bacteria HAB is seeking or the HAB team themselves."
The exhibition artistically explores their search for life at the edge of space and "the pleasure and pain of curiosity-driven research," says Dumitriu.

What the artists have taken from this collaboration is some of the human elements of scientific research that can sometimes get lost in formal scientific discourse. May explains: "To experience the story, that sometimes scientists have an idea for which they find a way to go and fire real rockets into the sky from a baking, dusty desert only to have it crash into the ground, is to experience a common sense of wonder and human camaraderie."

From the scientists' perspective, Grant says the artists have broadened the way she thinks about the project. De Peyer admits to feeling envious of the freedom they have. "Which scientist can really put aside the daily grind and say that today, as a scientist, I am going to think up some fascinating blue sky scientific problem and explore it out of sheer fascination? It doesn't work like that any more. People like Anna and Alex can do it, though."

The exhibition included a live autopsy of the destroyed HAB device. In this public event in May the whole team participated in a 'dissection' to see what evidence might be retrievable and to retrieve useful components. They now plan to test some air samples hidden deep in the damaged device that had been collected during its fatal flight.

Where our modern, amateur, curiosity-driven scientists differ from those of the past is their lack of personal funds or wealthy benefactors. A solution to this was a public 'space biohack' day, also held at BOM in May. The idea was to attract further skilled hackers, artists and makers to get involved. Dumitriu says the biohacker approach "is reminiscent of historic research projects, such as Florey and Chain's welded biscuit-tin culture vessels for penicillin".

Whether HAB II can be launched and make a real contribution to astrobiology remains to be seen. If it does, de Peyer may yet get to present the results to The Linnean Society. "I think Carl Linnaeus would approve of the extension of biological taxonomy to the tiniest living denizens in the furthest reaches of our atmosphere," he says. 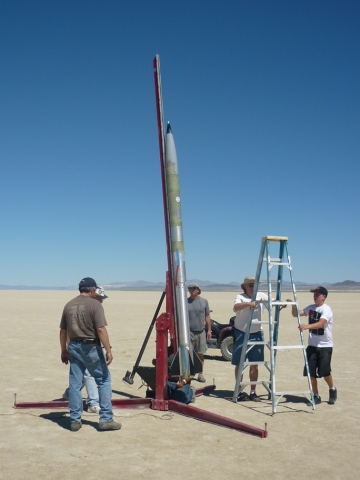 The team preparing for lift off in the Black Rock desert.

Rachel Brazil is a freelance science writer based in London.