How do we define if a species is native or non-native? Anne Goodenough looks at the challenges ecologists face when deciding what 'belongs' where

The translocation of species from their native range to new environments is an increasingly common phenomenon as the world becomes ever more interconnected. The resulting biological homogenisation means the species present in a community, and the ecological interactions between them, is one of the most important contemporary issues in biology, with implications for ecological monitoring, management and conservation, especially for vulnerable locations such as island ecosystems.

Species within communities are often categorised as native or non-native. Native species are typically regarded as those that occur naturally within a specific geographical area, whereas non-native species are those that have been introduced artificially, either deliberately or accidentally, through human movement or trade. These can have substantial ecological effects, as evidenced, for example, by the effect of cane toads (Rhinella marina) in Australia.

However, in practice, defining native and non-native is rarely this clear-cut. The theoretical concept is straightforward, but, as is often the way, the application of the concept is not without challenge. There are two key questions. How long should a species have been present in an area before it is regarded as native? And how far does a species have had to have travelled before it is classed as non-native?

In terms of temporal scale, one common suggestion for the demarcation of native and non-native species is the year 1500 AD, with species present in an area before 1500 regarded as native and those that have arrived since 1500 considered to be non-native (in the case of plants, the terms archaeophyte and neophyte, respectively, are often used).

This uses what is, in some senses, an arbitrary date, but it marks a change in ecological history after which trade, exploration and mass human movement began the process of accidental and deliberate movement of species much more widely, and in much higher numbers, than had previously been seen.

This date can vary between locations depending on human activity. For example, in Australia, taxa mentioned in a 1770 Flora are considered native, while later arrivals are classed as non-native, reflecting the fact that mass human movement and trade to and from Australasia happened later than in other places.

Another possibility is to go much further back and use the end of the last ice age as the native/non-native demarcation. This takes account of the fact that species move around the globe naturally, and especially in response to changes in climate and geographical barriers. For example, the United Kingdom was joined to mainland Europe by a temporary land bridge, called Doggerland, in the last ice age, while Siberia was linked to Northern America via the Beringia land bridge. It also allows for the movement of people and species introductions well before 1500 AD.

In addition to the question of time, there is the issue of spatial scale. If a species' range begins to extend into a contiguous area, perhaps because of loss of a geographical barrier, this is typically regarded as range change.

Distinguishing range change from introduction can be straightforward. The movement of the brown tree snake (Boiga irregularis) from Australia to Guam in the late 1940s or early 1950s is a clear example of an introduction, where individuals were accidentally transported several thousand kilometres over water on cargo planes. Conversely, the arrival of collared doves (Streptopelia decaocto) in mainland Europe and the Middle East, which occurred at about the same time as the tree snake translocation, is usually viewed as natural range change. Between these two clear ends of the continuum, things are less clear-cut.

However, contrary to popular opinion, a species does not necessarily have to come from another country to be considered non-native. For example, lake trout (Salvelinus namaycush) are native to the US's Great Lakes, but seen as non-native in Yellowstone Lake in Wyoming, while hedgehogs (Erinaceus europaeus) are native to mainland Scotland, but viewed as non-native on offshore Scottish islands.

Some people believe the mode by which a species arrives in a new area is important. In the case of the collared doves, no human action facilitated their spread, which adds to the argument that these are 'new' (as distinct from non-native or invading) species. However, this does not always hold. Species that colonise new areas naturally, such as the tree bumblebee (Bombus hypnorum) in the UK, are considered by some as invaders (Jones and Brown, 2014). This is especially true when geographical spread is facilitated, albeit indirectly, by human-induced climatic change or habitat alteration. 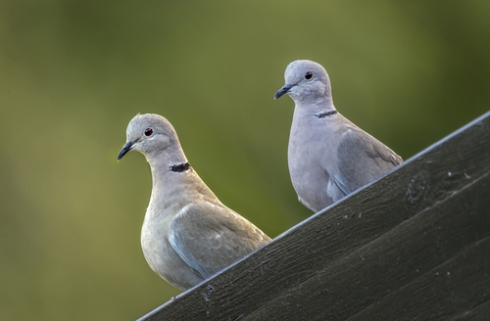 Collard doves - considered a 'new' species, rather than invasive

Species that arrived many years ago, such as honey bees (Apis mellifera) in North America 500 years ago or even the dingo (Canis lupus dingo) in Australia 4,000 years ago, can often be seen as a valued part of an area's natural biodiversity (Schlaepfer et al., 2011). Non-native species are sometimes considered as 'pseudo-native' – or 'naturalised' to use a more precise term – once they have self-sustaining populations and have built up a web of ecological interactions with other species, especially native ones, in their new environment.

This acceptance often seems to occur especially quickly if the species is charismatic – for example, European rabbits (Oryctolagus cuniculus) in the UK – or provides a valuable ecosystem service, such as pollination in the case of the honey bee. It seems we are much more ready to accept species from which we benefit, to the point that we might be more inclined to conveniently overlook their non-native origins.

To add a further level of complexity, not all species have a clear geographical history. Such species are called cryptogenic species (crypt from the Greek kryptos, meaning secret, and from the Latin genic, meaning origin). There are many such examples: it is not clear whether the grapsoid crab (Brachynotus sexdentatus) in France is expanding naturally from the Mediterranean or has been introduced.

Nor is it known whether the common periwinkle (Littorina littorea) is native in the eastern seaboard of North America: there is no evidence of it in the fossil record, but there is no record of an introduction either. Sometimes, a species might be known to have been introduced, but the timescale is unclear (such that it could be classified as native or non-native). A UK example is the sycamore tree (Acer pseudoplatanus).

The number of cryptogenic species is difficult to quantify. However, a systematic study in San Francisco Bay, US, suggests that there are around 100 aquatic plants, animals and protists in that ecosystem that are cryptogenic compared with the 300 or so species known to have been introduced (Carlton, 1996).

So why is all this uncertainty and lack of consensus important? It largely comes down to the fact that there are very different attitudes towards, and policies for, native and non-native species. The way cryptogenic species are viewed from management and legal standpoints is especially complex. For example, with the Eurasian eagle owl (Bubo bubo), the individuals currently breeding in northern England are likely to be captive escapees, but there is some evidence in the fossil record that the species was once native (Stewart, 2007).

The species' legal status is thus unclear. It is protected under UK law where it is breeding in a natural state (Wildlife and Countryside Act 1981), but the species is not included on the British Ornithologists' Union list of native (or naturalised) birds. Moreover, if the species were listed as native, the small population would probably afford it special protection and potentially result in conservation measures, whereas non-native classification could theoretically lead to control measures.

Another example is the beaver (Castor fiber), which was unofficially released in Devon. Here, the species' status was clear (native), but because provenance of the individuals was not known, there was concern that the beavers could be introducing non-native parasites such as the tapeworm (Echinococcus multilocularis). Cryptogenic status was thus at the level of the individual, not the species, in this case.

The complexities – both theoretical and practical – inherently linked to cryptogenic species is exemplified by northern pool frogs (Pelophylax lessonae), which were first considered a pest and then their status changed to conservation priority within a few decades as the information known about the species' history changed (see box below).

From pest to conservation priority

Northern pool frogs (Pelophylax lessonae) have a cosmopolitan distribution across Europe, but until recently were considered to be non-native in England. A few individuals occurred in isolated areas in the early 1900s, but were viewed as individuals from other non-native species known to have been released in the 1800s.

When individuals were rediscovered in Norfolk, they were considered to be descended from non-native populations and were thus candidates for listing under Schedule 9 of the UK's Wildlife and Countryside Act 1981 and potentially controllable as a pest.

However, examining historical documents suggested that these frogs were already widespread in Cambridgeshire and Norfolk before the earliest known introductions in the 1830s. These records were cross-referenced with museum specimens, which were found, upon re-examination, to be pool frogs.

The species was thus redefined as a UK native using the end of the last ice age demarcation and regarded as highly threatened. Far from being listed as a pest under Schedule 9, this meant it was considered a conservation priority, to the extent that it was reintroduced in a scheme coordinated by the then statutory regulator, English Nature.

A similar situation occurred in North America where the status of water lettuce (Pistia stratiotes) was unclear, due to fragmented knowledge of its pre-modern Holocene dispersal and widespread observations of ecological invasiveness, especially in Florida. In 2013, emergent conservation concerns prompted interest in resolving persistent uncertainties about this designation and associated management.

A synthesis of paleo-botanical, historical, and ecological evidence by Evans et al. (2013) overwhelmingly pointed to the species being native and concerns were raised about control-based management based on the assumption it was non-native.

It is interesting to reflect that our propensity to catalogue species – either taxonomically or in terms of temporal and spatial scales – flies in the face of the inherent complexity of the biological world. Species' interactions with other species in their community remain unchanged by whether they are regarded as native, non-native, naturalised or cryptogenic. Our attitudes to species are often defined, at least in part, by the label we put on them. Similarly, the decisions as to whether ecologists should conserve, eradicate or simply keep a watching brief are shaped by which side of the native/non-native boundary a species is assessed to be.

As biologists, it is vital we factor this into our decision-making processes so our actions are evidence-based rather than controlled by the drawer of the filing cabinet in which a species happens to have been placed.

Goodenough, A. E. Are the ecological impacts of alien species misrepresented? A review of the 'native good, alien bad' philosophy. Community Ecology 11, 13–21 (2010).